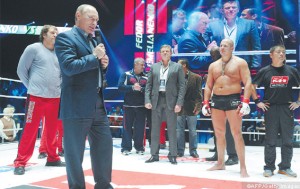 This week has seen continued analysis of the fascinating events of last Sunday, when Vladimir Putin was booed at a boxing match, a most unsettling reaction for a man who is used to being greeted by either rapturous applause or mute submission.  The video, which can be watched here, has elicited considerable attention.  Today’s Moscow Times editorial described it as ‘a watershed mark in Putin’s inevitable demise’.  We can but hope.

Meanwhile the New York Times has a report on how the advent of smartphones has empowered ordinary citizens to hold politicians accountable, thanks to the ease with which they can capture hard video evidence of unscrupulous behavior and then beam it out to the world via Youtube et al.  Politicians in Russia have long relied upon massaging the truth, when not giving it a complete makeover.  It is however, as the booing video has shown, almost impossible to put a positive spin on a cacophony of disapproval.  Charles Clover from the FT looks back to when the noisy protests began:

After their local hockey team “Tractor” beat the visitors from Moscow on Sunday in the central Russian city of Chelyabinsk, the crowd was in a joyous mood. They applauded even harder when Vladimir Antipov, Tractor’s victorious captain, took the microphone to say a few words after the game.

But the good vibe changed when Mr Antipov began to read from a sheet of paper handed to him.

“Parliamentary elections will be held on December 4,” he began, and the crowd almost instantly began to boo and whistle in disapproval. “The governor of Chelyabinsk region has done much to develop hockey here.” The booing increased and Mr Antipov grinned sheepishly, but continued: “He is the head of the election list of United Russia party, let us all support the governor and united Russia!”

At that, the booing reached a deafening crescendo. “Whoever wanted to hear it, heard it,” said the television announcer obliquely, as Mr Antipov, smiling and red faced, skated off the ice.

In what is becoming an epidemic across Russia, the ruling elite are being booed and catcalled in public. The trend points to plunging faith in the regime with just days to go before parliamentary elections on December 4, ahead of a sensitive change in power next spring when prime minister Vladimir Putin will probably resume the presidency.

Last Sunday, television viewers were shocked when Mr Putin himself was roundly booed while attending a Moscow martial arts contest, when he stepped into the ring to congratulate the winner. One of several YouTube videos of the episode has been watched over 2m times.

Mr Putin’s spokesman Dmitry Peskov tried lamely to insist that the booing had been aimed at the losing American fighter. Vladimir Pozner, a respected television presenter, said it was “totally untrue” that the booing was not aimed at the premier. “People are pissed off, I think it’s a healthy reaction,” he said.

The recent booing trend seems to have started on November 3 in the Siberian coal mining town of Kemerovo, when a United Russia spokesman got up on stage at a rock concert to thank the band on behalf of United Russia. Grainy camera-phone footage on YouTube showed a tentative “boo!”, followed by a growing chorus which filled the auditorium. Andrei Makarevich, the hugely popular lead singer of the rock group Time Machine, said the political agitator “should be shot” for making the surprise appearance on stage.