Bourgeoisie At The Barricades? 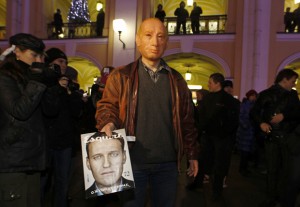 With any burgeoning protest movement, there is always debate as to where a volley of momentum may be coming from.  Among the spate of articles concerning the ‘amazing’ scenes witnessed in Moscow this weekend, several have identified the involvement of middle class elements in the demonstrations as a break with tradition.  Whether this is the case, or indeed whether it is still relevant to talk in class terms when it comes to identifying strands in a movement in the era of the twitter revolution, is being considered at some length.  Charles Clover from the Financial Times quotes one analyst who believes that the class, some would say Vladimir Putin strove to create, is now is turning against him:

One of the prophets of the new politically active middle class has been sociologist Mikhail Dmitriev, president of the Centre for Strategic Research, a Moscow think-tank. He was roundly ridiculed for a focus group study published in February which predicted that the regime would face a “crisis of legitimacy” in the autumn. The urban middle class – 40 per cent of Moscow’s population and 20-30 per cent in other big cities – was “a political detonator which cannot be unscrewed,” he wrote in newspaper Vedomosti in July.

Now, however, he looks to have been convincingly vindicated.

To be fair to his critics, the emergence of a politically conscious “middle class” which would defend Russia from a slide back towards authoritarian rule has been one of the most frustratingly elusive and most often predicted phenomena of the post-Soviet era.

After the end of communism in the 1990s, many western statesmen and Russian democrats placed their hopes in economic reforms which, so the theory went, would create a new middle class of property owners who would fight to keep what they had gained.

This failed to emerge largely because “reforms” did the opposite – impoverishing the bulk of the population and creating a class of stratospherically wealthy oligarchs who brought former KGB colonel Vladimir Putin to power. Ironically, it took the authoritarian Putin era to create what could credibly called a middle class, whose real incomes rose 142 per cent in the decade from 1999-2009.

For much of the Putin era, the nascent middle class were content to sit on the sidelines and watch. “They might watch the communists or someone else demonstrate against the government but they were never part of it. Politics was something that happened on TV” said Gleb Pavlovsky, a former spin doctor for the Kremlin,

But this month’s elections, when United Russia saw its support, according to official results, collapse to just 49 per cent, marked a watershed. Pervasive evidence of fraud meant people who had never joined political protests felt cheated. The Kremlin compounded the insult by using force to quash demonstrations throughout the week, only relaxing its grip to allow Saturday’s demonstration to go forward.

Mr Pavlovsky said the election left many first-time voters embittered. “Suddenly, this was something that was not just happening on TV, it was something happening to them, to their friends, and now they are involved,” he said.