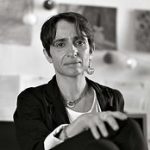 Today is International Women’s Day – which is conferred the status of a national holiday in Russia.    Socialist Worker has marked the day by delving into Russia’s revolutionary legacy, with a reminder that the Bolshevik revolution was, they argue, sparked on this day, by the protest actions of a group of female textile workers.  That there is a long and rich history of female independence in modern Russia is doubtless.   This week alone we have seen feminism in action in varying forms, from the riot grrl sensibilities of anti-Putin punk band Pussy Riot, to the high political maneuvering of Irina Prokhorova, who may well overshadow her brother, tycoon and former presidential candidate, Mikhail.  Countless women have sacrificed their lives in recent years in the pursuit of freedom of speech and human rights, among them Anna Politkovskaya, Natalia Estemirova, Anastasia Baburova to name but a few.

So it seems apt that the New York Times blog has interviewed Masha Gessen, the audacious reporter who has authored a new book about Putin, “The Man Without A Face: The Unlikely Rise of Vladimir Putin.”  In the text, Gessen attempts to unmask the man who has come to represent Russia’s political petrification.  The process of writing such a book, as the fate of her fallen colleagues attests to, can be extremely perilous.  It is certainly worth reading the whole interview, but the following Q+A seems to offer a crystallization of the inestimable determination of this writer:

The reviews of your book have called you brave and courageous. Do you feel safe living in Moscow? Do you think of leaving?

I have thought of leaving, and I have even made plans to leave. The truth is, I don’t want to. I love my home, my friends, my job, my life. And if Putin doesn’t like me, he can leave.