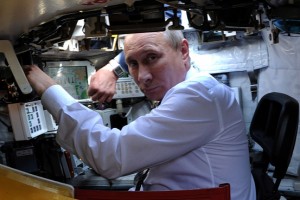 When Germany’s Quadriga Foundation attempted to award Vladimir Putin dedicated to ‘role models who are committed to enlightenment, commitment and welfare‘ the outcry, indeed laughter, was so resounding that the prize was retracted and the entire back-slapping ceremony cancelled.  It seems this news never made it to China, who, the Wall Street Journal reports, has gone one better in the competition for finding the least-deserving-prize-nominee by selecting Mr Putin for its Confucious Peace Prize.  Baffling:

Nominees for the award were announced by Liu Haofeng, executive chairman of the award, on Saturday, according to AFP. In addition to Mr. Putin, those making the shortlist include German Chancellor Angela Merkel, nominated for “her contribution to regional peace in Europe”; the Panchen Lama, for “promoting harmony in China”; South African President Jacob Zuma; Yuan Longping, a Chinese scientist known as the father of hybrid rice; Microsoft co-founder Bill Gates; former U.N. Secretary General Kofi Annan; and James Soong, chairman of Taiwan’s People First Party.

Mr. Liu told AFP the award had been set up by an association overseen by China’s culture ministry. Last year, when asked by China Real Time whether the Ministry of Culture had any relationship with the Confucius Prize awards committee, a ministry spokeswoman said: “There are so many organizations affiliated with the ministry. It’s hard for us to check.” But even the revelation of the candidates has not been without controversy, with a member of the Confucius Prize’s jury criticizing Saturday’s announcement as having been made before the jury had approved the candidates.

It’s unclear what Mr. Putin has done to deserve nomination for a peace prize, particularly given his role in helping launch Russia’s second war with Chechnya in 1999 — though the awarding of the 1994 Nobel Peace Prize to Palestinian leader Yasser Arafat (along with Shimon Peres and Yitzhak Rabin) was criticized along much the same lines.