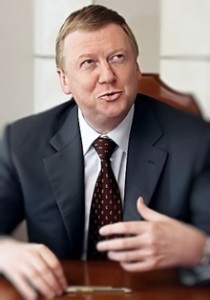 In the run-up to this Sunday’s parliamentary elections, opposition leader Garry Kasparov has advocated abstention as the most effective method of protest as it is harder for United Russia to manipulate non-votes than votes.  The Wall Street Journal reports today the news that Rusnano chief and 90s economic shock reformer Anatoly Chubais has announced he will be among those shunning the election booth.

Chubais apparently wrote on his blog on Saturday: ‘For the first time in 20 years it seems that I am among those who have no one to vote for. Therefore for the first time I am not going to vote‘.  This is not the first time the privatizing whizzkid of the Yeltsin administration has used his Live Journal platform to voice opposition to recent developments on the political landscape.  At the end of September, he warned Vladimir Putin that the departure of veteran finance minister Alexei Kudrin from the government was extremely perilous for the Russian economy.  If the example of Kudrin’s fall from grace is anything to go by, Chubais will be well aware that criticism of the government comes at one’s own risk.