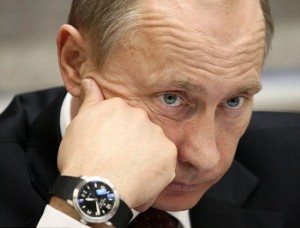 There have been numerous question marks about the viability of Vladimir Putin’s anti-corruption drive, which seems to have taken center stage in policy terms over recent weeks.  Many observers have noted, with good reason, that the President’s vows to weed out graft must seem factitious, given that he remains one of the primary beneficiaries of systemic corruption, be it in simple material terms or in terms of the political stasis it solidifies.  Brian Whitmore makes that point convincingly here, as does John Lloyd in a more general piece in Reuters today.  In very early evidence of its limitations, we have some detail in from ITAR-TASS’ Lyudmila Alexandrova, who sees that after an initial and very public burst of activity, moves to extirpate graft have already petered out:

For the past week there has been no word from the Investigative Committee of Russia, which just recently made daily reports of ever more officials involved in yet another corruption scandal. In the meantime, the cases that have been opened already over colossal theft and embezzlement are enough – abuse in the holding company Oboronservis, subordinate to the Defense Ministry, which cost Defense Minister Serdyukov his post, the affair of the former agriculture minister Yelena Skrynnik, and the theft of 6.5 billion rubles from the funds earmarked for the creation and development of the national navigation system GLONASS, as well as huge theft during preparations for the APEC summit in Vladivostok. It is worth adding probes into the Regional Development Ministry and the Health Ministry and suspiciously-looking loans issued by state-run banks.

The most high-ranking persons – Serdyukov and Skrynnik – have not been charged with any offences. Moreover, they have not been questioned even in the capacity of witnesses.

Interior Minister Vladimir Kolokoltsev on December 10 said, though, that “the investigation of the GLONASS case over corruption is proceeding productively.” He said police operatives would continue to probe into corruption in the GLONASS affair steadily and without any hasty campaigning.

However, when asked if Yelena Skrynnik might be questioned in the course of the investigation, Kolokoltsev said it was a competence of the Investigative Committee. “It is up to them to decide. We are conducting the struggle against corruption in defiance of ranks and posts,” Kolokoltsev said.