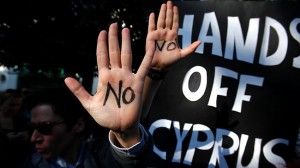 The worsening banking crisis in Cyprus has proven to be an interesting measuring stick of many assumptions.

Sullied by its reputation as a haven for wealthy Russians and the dark arts of tax avoidance, Cyprus has not received the sort of sympathy over the suffering of its completely innocent citizens like in cases such as Ireland or Argentina.

Instead, it was presumed that Vladimir Putin would raid the Cypriots in their moment of vulnerability to politically annex the country and seize future energy assets, and then, when Russia ostensibly turned down an outright bailout, some leapt up to say they were defeated or were up to some other sort of mafia-like activity.

Whether you agree with these perspectives or reject any idea that criticises the glorious leader, what are failing to take notice of is a new stage in Putin’s foreign policy ideology:  the Slavophile pivot.

Whereas the first stage of Putin’s leadership largely focused on establishing his grip on power and pragmatic engagement (1999-2003; earn the money), and the second was the “dual state” of selective confrontation and diversification of ties (post-Yukos, post-Munich speech; move the money offshore and expand Russia’s footprint), the Slavophile pivot is about much more than just moving the money back to Russia.

It has been easy to dismiss the Stalinist revivalism and frequent stewing of Russia’s historical identity as mere distractions to ensure that the nationalists and opposition do not forge a meaningful alliance, Putin has for some years been searching for an idea.  This idea, which would ideally serve to manage popular discontent, organize and discipline the power structure, while also cementing his legacy, appears to be coming around to a return to Russian-ness, for whatever that’s worth.

We’ve already seen some incremental experiments in which the Kremlin has attempted to introduce new rules that slightly reduce the space for the elites, however without being big enough to cause a crisis of confidence in the system.  Our memories may be short, but it seems that there is a growing list of falling towers.  I recall everyone making a big deal about the removal of Moscow Mayor Yuri Luzhkov, but then the conversation went silent.  Then there was the epic fall of Defense Minister Anatoly Serdyukov (who apparently shouldn’t have had an extra-marital affair when married to the daughter of a kingmaker), and even the ordered resignation of Vladimir Pekhtin after Alexei Navalny showed his foreign property holdings.  As Brian Whitmore wrote on The Power Vertical, “the main components of Vladimir Putin’s power vertical are untouchable no more.”

There is a Slavophile “restoration” underway, but no one is sure how quickly it will happen.  For example, although the recent limits on foreign property for Duma members and the laws to repatriate wealth have so far seemed to be little more than a bureaucratic hurdle for most Russian elites (for example, you could just form a shell corporation and move assets under a different, non-personal vehicle), there could be further measures in future months and years that would seek to place Putin in a greater position of discretion over the wealth of Russia’s most prominent citizens that will serve, for the time being, as an ongoing substitute for rule of law.  However, the re-alignments of relationships to secure such unpopular changes to the informal system of rules will undoubtedly prompt some resistance, requiring an intense and careful navigation by the president’s administration (i.e. more Bastrykin and less Surkov).

Cyprus has been disappointing for revealing how we seek to fit the evidence to our views, rather than let our views respond to evidence, but I suppose that has always been the case with Russian politics, and probably one of the reasons it remains one of the most fascinating and inescapably mysterious to both the observer and participant.