Dismay And Despair At Navalny Verdict 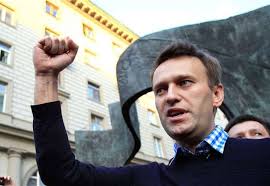 In what has been described by one commentator as Russia’s ‘Mandela moment‘, whistleblower and opposition luminary Alexei Navalny, who has emerged as one of the strongest anti-Putin forces in today’s Russia, has been sentenced to five years in prison on embezzlement charges widely believed to be fabricated. Here is just a pithy selection of some of the reactions the news has inspired:

‘The verdict against Navalny looks less like a punishment than something intended to isolate him from public life, [and] the election process,’ Alexei Kudrin.

‘Judge Blinov is, it seems, the only person in Russia who did not see a political element to the Navalny case,’ Mikhail Prokhorov.

‘Navalny’s show trial, as well as the posthumous conviction last week of another opponent of corruption, Sergei Magnitsky, are only the most recent examples of how the Putin government seems determined to drag Russia back to some of the worst aspects of its past,’ U.S. Senator John McCain.

‘We are deeply disappointed in the conviction of @Navalny and the apparent political motivations in this trial,’ U.S. ambassador to Moscow Michael McFaul via Twitter.

‘With today’s ruling, Putin has told the whole world he is a dictator who sends his political opponents to prison,’ Boris Nemtsov.

‘Now stocks will fall, capital will leave. There won’t be any other articles in the press for a year. Our government takes one step forward and two steps backward. Is anyone in the Duma thinking?’ Oleg Tinkov.

‘Everything that is known to me about this case — how it started, how it was closed, then opened again later, how the case was heard in court — unfortunately, confirms that we don’t have an independent court,’ Mikhail Gorbachev.

‘OK. Don’t miss me too much while I’m gone. But, more important, don’t sit on your hands: The toad will not jump off the oil pipe of its own accord,’ Alexei Navalny.