Tens of Thousands Brave the Cold to Protest 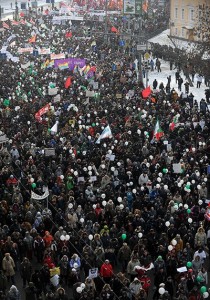 As many as 120,000 Russians (those are organiser figures; police estimates are as low as 23,000) braved freezing temperatures to march on Moscow’s streets against Vladimir Putin yesterday.  The BBC has footage; this video report from Al-Jazeera is particularly good, and includes some footage from the distinctly less colourful (and Kremlin-orchestrated) pro-Putin rally held on the other side of town.  AP has compiled some raw footage of the anti-Kremlin march which includes crowds shouting ‘Russia without Putin!’ and some aerial views of the crowds.