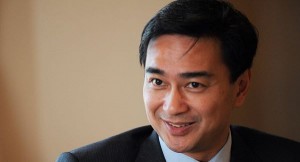 As many blog readers know, for several years now we have been working very hard to help bring about accountability in Thailand for the 2010 massacres which killed more than 90 peaceful protesters as the Army moved in, under the orders of the Prime Minister, to violent clear the streets and maintain an unelected government.

Today represents only the latest milestone, and is by no means the end of the struggle, but nevertheless is seen as an important day.

A headline to remember from Reuters:

Thai authorities charged former Prime Minister Abhisit Vejjajiva on Thursday with giving orders to use live ammunition that led to civilian deaths during a military crackdown on an anti-government protest in May 2010.

The Department of Special Investigation (DSI), part of the Justice Ministry that has a similar role to the U.S. Federal Bureau of Investigation, charged Abhisit and former Deputy Prime Minister Suthep Thaugsuban for their role in the 2010 events.

“They allowed security forces to use weapons and live ammunition that led to the death of civilians,” said DSI chief Tarit Pengdith.

The DSI’s decision to press charges was influenced by a court ruling on September 17 in the inquest into the death of taxi driver Phan Kamthong during the protests. The inquest found that troops, acting on orders from state officials, killed Phan.

The two politicians were charged under article 288 of the criminal code. If found guilty, they could face the death penalty or up to life in prison. Neither was present when the charges were read out.

Thousands of protesters, supporters of former Prime Minister Thaksin Shinawatra, who was ousted in a coup in 2006, had taken to the streets of Bangkok in March 2010 to demand elections. More than 90 people died during the protracted protest.

Suthep headed the Centre for the Resolution of the Emergency Situation(CRES), a crisis control centre that authorised “live fire” zones during the protest and used emergency powers to shut down websites, radio stations and a television station.

Government-backed troops forcibly dispersed the crowd on May 19, prompting rioting and arson attacks that saw over 30 buildings set ablaze in some of the worst violence in modern Thai history.

Thaksin’s sister, Yingluck Shinawatra, is now prime minister. Her Puea Thai Party beat Abhisit’s Democrat Party in an election in July 2011 and he became leader of the opposition.