Guatemalan Elections Marred by Censorship and Barriers to Access 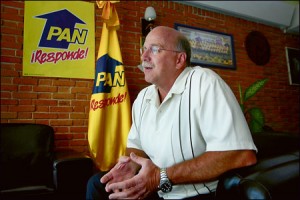 With only three weeks left to go before the first round of Guatemala’s 2011 general elections, a number of candidates for president are being denied access by the Guatemalan media, casting a negative pall over the fairness of the proceedings.  From the censorship of TV spots, to the manipulation of newspaper polls, and limited participation in the televised debates (including CNN Español), many are worried that the leading candidate is being given an unfair advantage while Guatemalan voters are deprived of the opportunity to understand their choices.

The media blockage comes at a critical moment:  on August 9th a historic decision was handed down by the Constitutional Court which barred Sandra Torres of the National Unity of Hope party from running in the election.  Despite the fact that Torres went through a divorce from her husband, current President Alvaro Colom, in order to skirt around the electoral laws preventing presidential dynasties, the court held its line in a rare show of institutional independence.

However with the removal of Torres, and potential disqualification of another candidate with relatives in the Church, the field is now wide open for a number of candidates to reach the run-off election against presumed frontrunner Otto Perez Molina, a former military general campaigning on a controversial platform of “mano dura.”

Over the weekend I had the opportunity to speak with my old friend and current presidential candidate Juan Gutierrez, Secretary General of the Partido de Avanzada Nacional (PAN), one of Guatemala’s largest and longest running institutional parties.  The Gutierrez presidential campaign has been arbitrarily and aggressively censored by the local media, significantly damaging the PAN’s ability to get their message out.  Most surprisingly, the public television stations (all under the ownership of one businessman with close links to the influence groups behind the leading candidate) have flatly refused to run campaign commercials on the grounds that they allegedly contain “offensive” content relating to other candidates.  In fact, you can watch the rather innocuous and standard advertisements below, and you will note that not once does the spot mention any other candidates by name.

Despite the fact that the stations run most other ads from the frontrunner without delay, the Gutierrez campaign team is often left waiting days and weeks while the TV stations hold their ads in an extended approval process – an amount of time which renders the messages irrelevant in a heated campaign.

“It is difficult to overstate just how important a role the media plays in the democratic process in Guatemala,” said Juan Gutierrez during a telephone call between campaign stops yesterday.  “We are holding immensely successful rallies with more 20,000 people showing up, and the next day the front pages of the newspapers cover another politician’s event that only had 2,000.  Our party is supported by one of the largest labour movements in Guatemala, known as the Patrulleros, numbering close to one million members, and instead the media handles our campaign as though it were on the fringe of public opinion.  We have a terrific message and great ideas about how to reinvigorate the economy and create jobs for Guatemalans, but we’re essentially blocked from getting our message out.”

However, even worse than TV ads and biased newspaper coverage is the issue of flawed opinion polls published by media groups and outfits linked to elite interest groups, which a number of opposition candidates say are often skewed 10-20% in certain cases.  Later on these polls are taken at face value by outside media organizations like CNN, leading to selection bias during televised debates that are watched by some 80% of the population.  On Monday, August 22, one of the most important media events is to be held, hosted by the Asociacion de Gerentes de Guatemala, a business lobby that has been organizing these public forums followed by televised debate on one of the public channels.  This year’s debate will only feature three candidates out of ten.  Further, on August 25th, a presidential debate organized and aired on Channel 3 by CNN Español appears to be planning to invite only four candidates:  Otto Pérez Molina, Eduardo Suger, Manuel Baldizón, and Harold Caballeros, who only was just recently inscripted as a candidate following a drawn out case with the Constitutional Court over his eligibility.

In a paid advertisement published in Prensa Libre on August 19th signed by Gutierrez as well as other candidates Alejandro Giammatei, Adela Camacho de Torrebiarte, Mario Estrada, and the Nobel-prize winner Rigoberta Menchu, the blocked candidates denounced the manipulation of opinion polls by pressure groups that led to the distorted limitations on TV debates.  The statement argued that it was unacceptable and unconstitutional for self-appointed private groups with their own political interests to deny 7 out of 10 candidates the opportunity to present their platforms to Guatemalan voters.  The ad requests immediate action from Guatemala’s Supreme Electoral Tribunal, as well as action from the Human Rights Ombudsman to stand up for freedom of expression for all across the political spectrum.

Speaking with another political consultant in Guatemala who preferred to remain anonymous, I am told that the potential results of the presidential election are even more fluid than one might expect.  “Given that so many voters that had previously backed Otto Pérez Molina were simply supporting him to ensure that Sandra Torres would not win, the recent Constitutional Court decision puts those votes up for grabs,” he said.  “Many voters have serious concerns about the ‘mano dura’ platform that he promotes, and could find the social proposals of the other candidates appealing.  Further given the PAN’s impressive organization structure – they are the second largest party in the country after UNE – they can mobilize voters from coast-to-coast, North-to-South.  I wouldn’t count them out.”

Having worked on a number of political issues surrounding election campaigns in different countries, including Thailand, Nigeria, and Venezuela, I would have to say that Guatemala presents a uniquely difficult challenge for democracy.  It’s not so much that people aren’t free to vote, and candidates aren’t free to represent their constituents, it’s more than all the major poles of influences remain under control of a very small group – from the media to the courts to the legislature.  With a relatively small population (14 million), skyrocketing narco-trafficking violence, desperate poverty and high rates of malnutrition and illiteracy, and a highly powerful and wealthy elite-military compact, the country has at various points throughout its history fallen into “State Capture,” as the institutions of governance and private sector media are sculpted into tools of profit to serve the agenda of a handful of businesses and organized crime outfits.

As just the most recent example, there has already been a small scandal relating to the leading candidates ties to the four most wealthy families.  The highly impressive online news outlet Plaza Publica has published some of the diplomatic cables released by Wikileaks focused on Otto Pérez Molina, describing him as “no babe in the woods,” and taking a closer look at his financial supporters – numbering among them Dionisio Gutierrez, a multi-millionaire oligarch and part owner of the Pollo Campero restaurant chain who was caught in a massive tax evasion and money laundering scheme in a civil court case.  Pérez Molina also addressed questions of his relations to the Mendoza drug trafficking family (he denies any substantive relationship) as well as human rights accusations.  Another leading candidate, Manuel Baldizon, is rumored to be closely allied with a powerful mayor tied to narco-trafficking, while the names of several other candidates have popped up as well.  However, as Plaza Publica has noted on their Twitter stream, no other Guatemalan newspaper has dared to run the Wikileaks story, conceivably because if just one economic elite decides they will no longer advertise their business empire in the paper, the publication would go out of business.

And there’s the nature of this self-sustaining cycle … you can’t expect the Guatemalan people to appropriately react to these repeated political scandals when they are deprived of objective and independent information from the news media.  And so it continues…