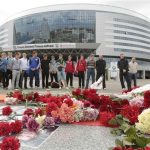 Just over two months after a Tupelov 134 crashed, killing 47 people, another tragedy has befallen Russian skies. This time the disaster has drawn the prolonged attention of the international media, as the accident wiped out almost all of the hockey team Lokomotiv Yaroslavl, 43 people in total, among them players from ten different nations.  President Medvedev has paid tribute to the dead and pledged to reform the airline industry.  As always, a case of too little, too late.  That Russia’s safety record in transportation and infrastructure is lamentable has, for a long time, been tragically obvious.

Very quickly after yesterday’s accident came talk of inadequate fuel as a potential safety glitch.  The ever-astute Streetwise Professor has picked up this trail and followed it, leading readers to a deeply disquieting theory:

This is all the more interesting given this story from last week:

Deputy Prime Minister Igor Sechin gathered government officials to formulate a response to looming fuel shortages at the nation’s airports on Tuesday. Media reports had earlier speculated that Moscow airports’ fuel reserves had dropped to critical levels over recent days. Sechin announced at the meeting that a 10-day fuel reserve was to be created for the capital’s airports.

Rosaviation had earlier said that they would call on Rosrezerv to send 180,000 tons of fuel to Moscow airports in order to avoid a collapse in flight scheduling. Vladimir Putin was set to sign the order if necessary, his press-secretary, Dmitry Peskov, said on Tuesday.

Fuel in airports running out?

Kommersant reported on Friday that there was only three days worth of fuel in the capital’s airports. Sheremetyevo reserves were reportedly boosted to four days — about 20,000 tons — but it was done at the expense of other Moscow airports. The fuel crisis in the airports was first reported on Sep. 2 when Moscow airports announced that there was a kerosene shortage and supplies would run out in several days’ time.

Further recall that since the spring Putin has been browbeating refiners about the pricing of petroleum products, and that refiners had duly pledged to keep prices low.  There are no formal price controls (though the government did slap on high export duties to try to keep fuel prices lower in Russia), but in a place like Russia, a threat emanating from Putin can be a very close substitute for formal controls.

The events of the past week give credence to that interpretation.  What are the two predictable effects of price controls?  1. Shortages.  2. Declines in product quality (including adulteration).  Put it all together: government pressure to keep prices low, shortages, and if the cause of the Yak-42 crash indeed turns out to be a fuel quality problem, a decline in product quality.  It fits.