In Russian Arctic Deal, Will Exxon Be Luckier than BP? 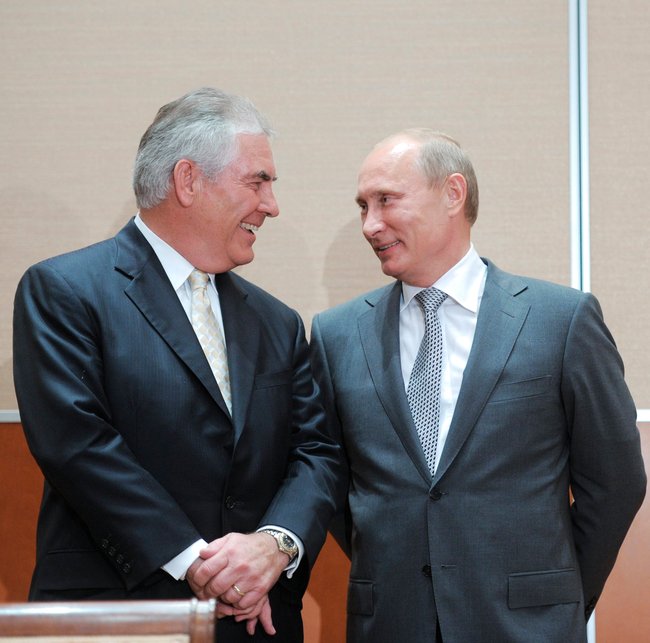 It’s an odd sight to catch Exxon CEO Rex Tillerman smiling and shaking hands with Vladimir Putin after signing a $500 billion oil exploration deal in Arctic waters (actually, the deal will start with just $3.2b, but Putin enjoys projections).  After all, it wasn’t that long ago when we saw similar photos of BP’s Bob Dudley toasting champagne with Igor Sechin to celebrate what was then one of the biggest joint ventures in the sector.  Of course, we all know what happened to BP afterward.

Exxon’s new deal with Rosneft to create a “global exploration alliance” is certainly interesting, not just because the company would in theory gain access to significant reserves in an untouched region, but also because of the asset swaps sought by the Russians to take ownership (or control – it is not yet clear) of a number of energy assets in the Gulf of Mexico and Texas.

So the key question is why Exxon, who has had significantly less experience in Russia, should be so much smarter and luckier than BP, which has a much longer history in the country.  The prevailing opinion, at least for today, is that Exxon stands of good chance of success in this business decision, based wholly upon the assumption that Russia “something to prove.”

From The New York Times:

For Exxon, which is America’s largest company and is a spin-off of the original Standard Oil, the deal means wading deeper into Russia’s risk-fraught business environment. As a result of the deal, the safety of more of the company’s investments and future earnings will depend on policies set in the Kremlin.

Russia has reneged on deals before. Until this year, Exxon’s principal investment in Russia was a production sharing agreement on Sakhalin Island. This form of contract waives local taxes, providing the host government a share of the oil instead, and is seen as less risky.

After the failure of the BP deal, however, the onus is now on Russia to demonstrate it can uphold an agreement, said Cliff Kupchan, a senior analyst at Eurasia Group, in a telephone interview.

“They got away with BP, because the deal was seen as BP having two Russian wives,” he said. Exxon, in contrast, has no exclusivity clause with a competitor in Russia that could come up in court.

From the Financial Times:

Exxon gets a huge opportunity in the Arctic – and will be further boosted by the fact that Russia cannot afford for another international oil alliance to fail. A stake in Exxon would have given Rosneft greater leverage with its new partner. But it knows it needs Exxon’s technical expertise to explore in the Arctic. By teaming up with Exxon, Rosneft has put the BP debacle behind it. If only the same could be said for BP.

This analysis strikes us as recklessly cavalier.  For instance, there is not much past evidence that Russia is very bothered by “how it looks” to foreign investors, and further, if they really had to “demonstrate it can uphold an agreement,” then why didn’t we see their behavior change after they stole Yukos, stole Kovytka, stole Sakhalin, and variety of other business scandals.

This isn’t so much a choice of Russia deciding who will be safe from corruption and who is allowed to be plundered … that would involve the assumption that such interventions and incursions on property can actually be prevented by a government lacking any real legal system.  BP may have made a lot of mistakes in Russia, especially in attempting to play by the “Kremlin Rules” and tie up with the perceived influence of Igor Sechin over that of the troika behind AAR.  But the idea that Bob Dudley and Tony Hayward weren’t making the best decisions possible based on experience and instructions from the highest levels of government doesn’t wash.  Exxon, despite its formidable reputation when it comes to disputes, is equally vulnerable to all that has happened to BP.

We agree with the analysts who point out that Russia is eager to put the poisoned BP deal in the dustbin, and they have certainly rushed forward with no delay to do what was necessary to bring Exxon to the table.  Nevertheless, the deal for some reason still smacks of “premature contractualization” – the habit displayed by both Rosneft and Gazprom of hyping up various MoUs as done deals, which does more to manage perceptions and create market pressures than actually produce oil and gas.  For example, it would be interesting to check up on how Gazprom’s blockbuster deal with Algeria is going, or that inappropriately titled Nigerian joint venture to develop natural gas, or, for that matter, what kind of progress Total has made in working on the Shtokman Field.

Best to remain patient and see what happens (or more likely, doesn’t happen).