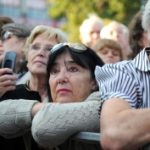 One could easily be forgiven for thinking in certain respects, the approach of Russia’s leadership to gender appears to be somewhat retrograde.  Recent strategies to drum up support for the ruling tandem have heavily featured the use of scantily-clad women, as if the presidency needed to be draped in female forms like a sports car in a 1980s advertisement.

Today, Russia Profile has an article discussing the absence of a feminist movement in contemporary Russia despite a history in which women have fact played predominant political roles. As the article points out, during the Revolution and the period following, a redistribution of power between the sexes was strongly evidenced.  Why therefore are women still very much the second sex?

Alla Ivanchikova, a gender studies researcher at the University of Alaska Fairbanks and the cofounder of the Survival Course for a Modern Woman Web site, pointed out the differences between feminism in Western countries and the current situation in Russia. “There was no second wave of feminism in the 1970s in Russia like in the United States and Canada, because many goals that Western feminists tried to achieve – labor protection, maternity leave, the availability of nurseries, the right to abortion, protection against job discrimination – were the norm in the Soviet Union. The generation of women who grew up in the Soviet Union is a generation of strong, well-educated and independent women,” she said. “However, Soviet women weren’t feminist because they received their rights and social protection ‘from above.’ Therefore, they couldn’t understand the scale of their losses after the collapse of the Soviet Union in time. Social inequality between men and women appeared together with the economic stratification in the 1990s. From my point of view, a new generation of women who could organize a feminist movement has just grown up now. They were born in the 1990s and grew up in post-Soviet society.”

Rima Sharifullina, the president of Peterburgskaya Egida, a St. Petersburg-based NGO that specializes in protecting women’s rights, links the absence of feminism with general human rights problems in Russia. “Feminism starts when women understand their rights and interests. But now all Russian citizens, both men and women, de facto don’t have electoral rights, rights to hold public meetings, rights to freedom of speech, property rights, etc. So a real women’s movement can appear only when basic human rights are achieved,” she said.

There are currently few women’s organizations in Russia and they have limited influence on society and politics. “Even such massive organization as the Union of Women of Russia, which is headed by a State Duma deputy [Ekaterina Lakhova], prefer to distance themselves from politics,” Voronina said.

Other women’s organizations include the Committee of Soldier Mothers, an NGO working to expose rights violations in the Russian military; the Union of Women Angara in the Baikal Region, which organized several free business schools and a crisis center for women; the Women of Don Union in the Rostov Region, which tried to attract public attention to women’s rights violations in Chechnya, and the Congress of Women of the Kola Peninsula in the Murmansk Region, which focuses on gender education. “Many of the women’s organizations which appeared in 1990s at the forefront of the democratic movement and focused on gender equality were closed due to the absence of resources and pressure from local authorities. Now only ‘traditional’ women’s organizations, which support families with many children, single mothers and families with disabled children receive some limited support from the state,” Voronina said.

Apart from financial and organizational problems, the development of a feminist movement in Russia is hindered by psychological factors. Women themselves often follow the patterns of a patriarchal society. “Not every woman can go against long-standing cultural norms and traditions. A patriarchal society applies moral and social sanctions to such women. So it is much easier to conform or focus on the personal. Many young residents in both Russian capitals choose the second,” Voronina said. “Surprisingly, most women are not aware that they live in a patriarchal society where they are constantly abused. Many believe that they are weak and silly and need a man’s protection. The external disrespect for women becomes a woman’s internal belief,” Ivanchikova said.