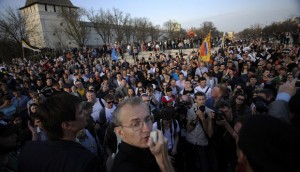 Whilst Oleg Shein’s physique continues to diminish, the power of his gesture shows no signs of abating.  The media continues to analyze the events in the southern city of Astrakhan, where the thwarted mayoral candidate is pursuing his hunger strike.  Shein is, lest we forget, a member of A Just Russia, which has long been considered one branch of the managed opposition, who themselves, their critics would say, facilitate the power vertical as much as Putin’s United Russia.  One of the interesting points to emerge, as Brian Whitmore points out here, is not simply the apparent birth of a regional protest movement, but that A Just Russia has developed its own momentum, as a potentially ‘real’ opposition party:

Witness Ponomarev, Gudkov, and Shein’s political party, A Just Russia. Established in 2006 as a pro-Kremlin project, it was supposed to be a housebroken center-left party that would siphon votes from the Communists, do the Kremlin’s bidding, and not make any trouble.

It has clearly gone off the reservation.

Likewise, in the current political environment, it is not difficult to imagine the Kremlin losing a degree of control over the electoral process under the emerging system — despite the elite’s best efforts to manage it.

A post from the Economist seconds this as an ‘intriguing side effect’ of the Astrakhan protest:

Alexander Kamanin, a Just Russia deputy in Astrakhan, says that the local party structure needed only a “push”—ie, Mr Shein’s loss in a fiddled election—to become a vocal and active antagonist of the Kremlin. With its leftish and quasi-populist profile, Just Russia could also benefit from a backlash against a nationwide increase in communal living charges due this summer. Mr Kamanin promises that, if protests over higher charges emerge, his party “will absolutely not only support but also lead this movement.”