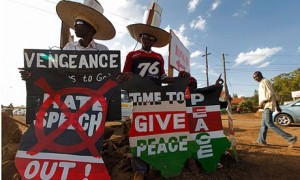 If we were to read only a handful of Western media publications about this week’s elections in Kenya, you’d think the entire country consisted of hacked limbs, machete-wielding mobs, and nightmarish savagery.

Instead, what has happened so far (bearing in mind we are out of the woods quite yet) has been an admirably calm and civil vote by a large majority of citizens determined to restore dignity to the country’s name.

The propensity by the international media to scrounge for negativity around the elections in Kenya is hitting a brick wall as the East African nation peacefully awaits the announcement of the winner of Monday’s presidential election.

No doubt, it is a close call between Uhuru Kenyatta and Raila Odinga. And naturally, in any close election, tensions are bound to rise, bringing with it a reminder of the terrible events that followed the last election.

But a lot of hard work has gone into the 2013 Kenya elections to avert the catasrophe of 2007 when more than 1000 people died in post-election violence.  We’ve seen cutting edge innovation from Kenya’s famous tech entrepreneurs to monitor and control violent incidences, careful international advocacy from regional monitors (including my client, the former President of Zambia Rupiah Banda), and a more responsible overall tone by the campaigns.

Images of the 2007 incident flashed international headlines bringing one of the world’s popular tourist destinations back into terrible spotlight.  Many Kenyans are upset by these negative portrayals, who feel that after years of recuperating the national image that the coverage has been unfair, biased, and paternalistic.  There seems to have been some expectations that Kenya will be covered in blood again judging by Western media coverage, and in some cases, as though the publications were just hoping to capture such a macabre moment.

Apart from an incident in Mombasa where an extremist group attacked others resulting in about 14 deaths, the pre-election period has generally passed as a peaceful.  Predominately, messages of peace and the importance to concede the outcome of the poll irrespective of the winner were communicated to candidates.

The backlash to bad media coverage has turned into comedy on social media.  International news channel CNN in its pre-election coverage aired a documentary from the Rift Valley – the spotlight for the 2007 bloodbath – showing Kikuyus preparing to defend themselves from any sort of attack from their Luo counterparts.  The CNN report was seen by many as far out-of-touch, making CNN the main target of criticism.

It seemed that for television the most important thing to broadcast about Kenya’s democracy was the fact that different tribes exist.  Yes, of course Kenyatta is Kikuyu and Odinga is Luo, and yes, there has been a history of tensions – but is there no ability to report on the Kikuyu, Luo, and dozens of other tribes that are mixed families, communities, businesses, friends, and more progressive post-tribal elements of Kenyan society?  Maybe it isn’t as nice of a story, but it is an important one that should be told.

Says Katami Michelle ‏(@MichKatami), “LOOL RT@Mwanikih Foreign Journalists stranded in their hotels as peace makes it hard for them to do their job.”

Another Kenyan The Sage ‏(@mycallmichael) adds, “BLOOD POURED ON STREETS OF NAIROBI as chicken slaughtered to celebrate peaceful elections.#someonetellcnn.”

A few trending hashtags in the country have been #tweetlikeaforeignjournalist and #someonetellcnn, as activists and political observers have parodied the bumbling coverage with playful satire.

“Kenyan moon refuses to leave the sky as the sun comes up.Heavy tension in the skies,” quipped @MainaKaibere.

“It cannot be true..they cannot be so perfect..there has to be a flaw somewhere that they are hiding!” wrote @FrankKenyan.

By now it seems like many of the foreign correspondents have caught on to the fact that the general drift of their reporting has gone far away from the reality on the ground, judging by recent reports, but hopefully during the next big African election, the foreign media can check their preconceived notions and afro-pessimism at the border and just go out and talk with the people taking part in this new phase of history.