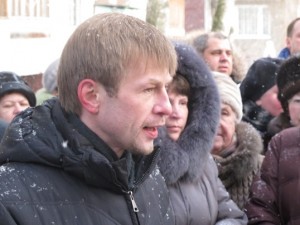 Whilst this weekend several hundred opposition activists tried to keep the protest fires burning in Moscow, around 1000 of their number had decamped to the town of Yaroslavl to act as registered observers in a mayoral run off election.  The result was doubtless gratifying.  Opposition candidate Yevgeny ­Urlashov, who ran on an anti-corruption ticket, has (seemingly) beaten by a considerable majority United Russia’s preferred candidate, local businessman Yakov Yakushev.  As many wonder if the opposition is losing steam, this has been taken as a indubitable sign that support for the anti-Putin movement is far from extinguished.  The victory also suggests that United Russia’s armory of dirty tricks ( Yakushev reportedly had restricted access to media and faced a raid on his offices as well as a smear campaign) might have limited efficacy.

The Washington Post points out that with gubernatorial elections coming up, the opposition could use Urlashov’s victory as the foundation stone for a strengthening of regional opposition politics:

‘[…] the Yaroslavl region is headed for gubernatorial elections, probably in the fall, to choose a replacement for the hugely unpopular, presidentially appointed incumbent. Those elections are part of a series of mild changes proposed by President Dmitry Medvedev in response to the political protests that erupted in Russia after parliamentary voting in December, although they were later watered down. Dominated by the city of Yaroslavl, the region could follow the city’s example and become a bulwark of opposition power.’