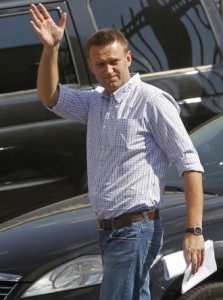 Opposition leader Alexei Navalny has been formally charged with theft of state property and banned from leaving the country.  The blogger, who if found guilty could spend ten years in jail, is accused of embezzling $500,000 in assets from a state timber company.  Navalny ‘might prove even more dangerous inside prison than as a free man’.  Opposition figurehead Eduard Limonov was reportedly among the 25 people detained at yesterday’s monthly freedom of assembly rally in Moscow’s Triumfalnaya Square.  A Karelian blogger charged with inciting hatred for attacking the Orthodox Church has been put on the international wanted list.  All three members of Pussy Riot have asked that their hearings be postponed due to extreme fatigue after being subjected to conditions one of their lawyers described as ‘torture’.  A United Russia deputy, Valery Fedotov, has surprised observers by penning a blog post supporting their ‘immediate release wholeheartedly’.  Dmitry Ternovsky, head of the politics section at the Lake Seliger youth camp, has also offered some verbal support.

‘By initiating a Middle Ages-style witch hunt against three young women, the Russian Orthodox Church has caused irreparable damage to its reputation in the eyes of the educated class’ argues this op-ed.  Yulia Latynina concurs, with an evaluation of the middle class exodus from Russia.  At the Lake Seliger youth camp, Vladimir Putin has denied that Russian agencies have the ‘goal of suppressing human rights work’ and defended the recriminalization of libel.  In Poland, U.S. Republican Party presidential candidate Mitt Romney has lamented that ‘in Russia, once promising advances toward a free and open society have faltered‘.

BP has reported a second quarter net loss of $1.4 billion due largely to underestimating the impact of a tax lag on Russian production.  Bloomberg reports that Russia will pursue legal action to prevent Iranian companies from purchasing the prized Astrakhan port on the Caspian Sea.  The drought currently affecting grain yields across Russia could result in a shoot in food prices, pushing inflation beyond the central bank target of 6%.

PHOTO: Opposition leader Alexei Navalny waving to journalists as he arrives at the office of the Investigative Committee on Tuesday, July 31, 2012. Prosecutors charged him with organizing the theft of timber from a state company. (Misha Japaridze / AP)