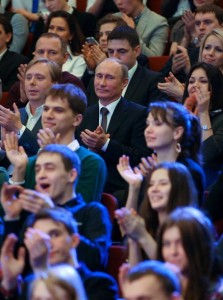 President Vladimir Putin has issued a three-month deadline to Russian officials to close their foreign bank accounts if they want to keep their jobs, as his spokesman Dmitry Peskov vows that there will be ‘no untouchables’.  Some anti-corruption campaigners are unsatisfied with the measure, saying that it merely ‘checks off boxes’.  He has also signed a law that undoes one of former President Dmitry Medvedev’s reforms, allowing governors to be appointed from a Putin-approved list, instead of directly elected.  The nationwide inspection of NGOs has reached Voronezh.  The administration office of Nizhny Novgorod is being investigated over allegations of a $16 million embezzlement of funds earmarked for road repairs.  Over $8 billion has been earmarked for the upgrade of the Far Eastern rail network over the next five years, part of a bid to increase freight traffic to the Far East.  Yulia Latynina says that a ruble devaluation is inevitable, because of ‘useless red tape’: ‘The degree to which the Russian government interferes in the everyday functioning of industry exceeds all rational limits.’

34% of all outward investment from Russia in 2011 went to Cyprus, says the IMF: ‘How did so much Russian money end up in Cyprus?’, asks the New York Times.  The majority of the complaints received by the Kremlin’s human rights ombudsman last year were related to unfair court judgments and poor prison conditions.  Moscow may not sign the ‘overwhelmingly approved’ first treaty on the global arms trade, after abstaining on the initial vote.  The BBC has a special report on Russia’s 2,000 orphanages, which it calls ‘a system for storing Russia’s unwanted children’, because many of them have been abandoned by their living parents due to mental or physical disabilities.  Kremlin plans to reduce the number of children in these institutions are meeting ‘strong institutional resistance’.  Dmitry Rukavishnikov, an aide to Duma opposition deputy Ilya Ponomaryov, has been detained in connection with last year’s riots.

Gazprom is reporting an almost 34% jump in exports for March, year-on-year, as company head Alexei Miller praised a ‘gas boom’.  Nonetheless, the company’s valuation has hit less than $100 billion for the first time since 2009, amid rumors that it is being mismanaged.  Tele2 is defending its decision to sell its Russian unit to VTB for $3.5 billion after a number of companies complained at having been shut out of the bidding.  Sergei Polonsky has been released from his three-month stint in a Cambodian prison.  The political graffiti artist known as P183 has died.