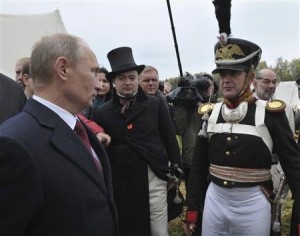 An estimated 100,000-200,000 people attended a re-enactment of the 1812 Battle of Borodino in Moscow, at which President Vladimir Putin marked its 200th anniversary by calling for unity and patrotism, and calling for a ‘powerful, all-embracing leap forward in modernisation of the defence industry’ like the one carried out by Stalin in the 1930s (RFE/RL has images).  Days after Deputy Prime Minister Vladislav Surkov assumed full responsibility of overseeing the Kremlin’s ties with religious organisations, the Orthodox Church has announced plans to set up a youth movement, tentatively called the Voluntary Association of Orthodox Youth.  According to reports, around 30 Strategy 31 demonstrators were arrested on Friday for their usual unsanctioned rally.  The Russian ambassador in Britain will demand a response from the Foreign Office about news that a Magnitsky list, which will ban roughly 60 officials from entering the country, has been implemented.

The case of Gennady Gudkov is exposing the personal fortunes of many Duma deputies.  Gudkov says that prosecutors have formally asked lawmakers to expel him from the chamber, and has written to 50 United Russia deputies, asking them to vote against his ouster.  Oil extraction reached a new post-Soviet record of 10.38 barrels per day in August, as producers took advantage of high prices.  The official confirmation that Otkritie Financial Corp will take control of Nomos Bank heralds the formation of Russia’s second-largest privately owned bank.  The deal ‘has puzzled investors because Otkritie is a minnow compared with Nomos’.

Boris Berezovsky has responded incredulously to the ‘almighty and devastating kick up the backside’ delivered to him by the London High Court judge in dismissing his case against Roman Abramovich: ‘Sometimes I had the impression Putin himself wrote this judgment.’  Jailed Pussy Riot member Nadezhda Tolokonnikova gave an interview to Germany’s Der Spiegel magazine this weekend, saying she has no regrets.  ‘I love Russia but I hate Putin.’

PHOTO: Russian President Vladimir Putin (L) meets participants in period costume during an event to commemorate the 200th anniversary of the Battle of Borodino at the Borodino museum-reserve outside Moscow September 2, 2012. REUTERS/Alexsey Druginyn/Ria Novosti/Pool