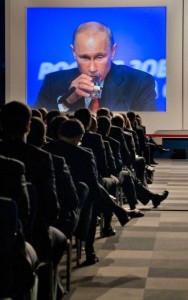 Russia’s Investigative Committee has opened an investigation into a pro-Pussy Riot art exhibition in Moscow over concerns that it could incite religious hatred.  The Parliamentary Assembly of the Council of Europe has decried Russia’s ‘restrictive political climate‘ in a new report which highlights numerous failings in free speech and human rights.  Opposition radio station Ekho Moskvy is apparently one of the prime contenders for this year’s Nobel Peace Prize.  The mother of deceased lawyer Sergei Magnitsky has testified that her son was tortured by a former official at the pre-trial detention facility where he died.  Brian Whitmore ponders who from the diverse opposition movement will triumph in the primary elections to the new Coordinating Council, also discussed in this profile piece on protest figurehead Ilya Yashin.

Despite the fact that the party of Russia-bating Mikhail Saakashvili has lost Georgia’s parliamentary elections, it is not a given that relations between Tbilisi and Moscow will change dramatically, analysts argue here.  Foreign Minister Sergei Lavrov has warned that the ‘reset‘ with the U.S. will end in ‘programme failure’ – unless it gets a ‘software update‘.  He asserted that Russia will not subject European foundations to the same fate as USAID.