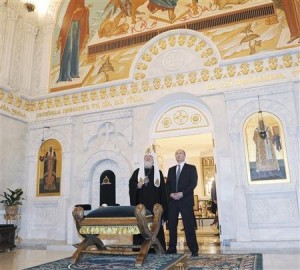 Left Front leader Sergei Udaltsov snubbed a meeting to mark President Dmitry Medvedev’s signing of a new bill drastically reducing the minimum membership requirements for political parties wishing to take part in elections. ‘I see no point in taking part in a formal event in the capacity of a silent Kremlin decoration,’ he said, condemning the reform as a sham.  Vladimir Putin, meanwhile, applauded his own United Russia party as ‘a leading political force’ and promised that his All-Russia People’s Front will continue its work.  Mikhail Ignatyev’s plan to create a list of ‘media that write lies’ is an attempt to pressure advertisers into avoiding independent bodies, critics say.  Medvedev ignored an expert panel’s recommendation that Mikhail Khodorkovsky be released.  A Moscow court rejected an appeal by the Magnitsky family to have the tax evasion case against former lawyer Sergei Magnitsky closed, insisting that the case is ‘legal and reasonable’.  The U.K. government is under pressure to publish the names of Russians suspected of having links with targeted assassinations, after a Russian banker was shot in London last month, sparking concerns that the country ‘might be turning into a playground for Russian mobsters’.  Does the success of Kofi Annan’s peace plan for Syria hinge on Russia’s willingness to maintain its pressure on Bashar al-Assad?

The Orthodox Church says it has come under attack from ‘anti-Russian forces’ following its backing of Vladimir Putin in the run-up to the presidential elections, including punk group Pussy Riot as one of its ‘attackers’.  Amnesty International is urging the authorities to release the three members of the group still in prison.  Yulia Latynina writes on Vladimir Putin’s plans to create a 400,000-strong National Guard to protect the country from internal threats, which she says would cause Russia to resemble ‘a classic South American or Middle Eastern dictatorship’.  Russia will decline the U.S. invitation to observe test launches of its missile defense system.  Vladimir Ryzhkov contextualises the current position of, and difficulties faced by, Ambassador Michael McFaul.  U.S. funding for democratic institutions in Russia is ‘reaching a scale that is turning into a problem in our relations’, says the Deputy Foreign Minister.

A Russian publisher has refused to withdraw its Stalin notebook. ‘If these notebooks end up in schools, kids who don’t yet know history can think: ‘You can kill a lot of people, but still be great’. It’s very dangerous.’  The Independent remembers Marina Salye.  Russia’s municipal council meetings are turning violent as residents become passionate about local politics.  RFE/RL reports on Konstantin Yankauskas, the opposition candidate who recently won a seat on Moscow’s municipal council after a U.S. style campaign of meeting voters and listening to their opinions.