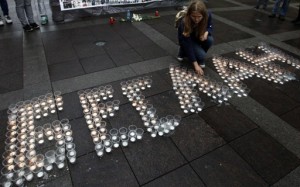 Yesterday marked the Day of Remembrance of Victims of Terrorist Attacks, with many laying wreaths at attack sites in Moscow.  Putin critic and journalist Masha Gessen says she lost her job at Vokrug Sveta magazine for refusing to cover one of Putin’s expeditions (where he released some endangered Siberian cranes).  Vladimir Ryzhkov points out that the very likely ouster of State Duma Deputy Gennady Gudkov will set a precedent allowing the Kremlin to dismiss ‘any opposition-minded deputy’.  Prime Minister Dmitry Medvedev has commented that the global presence of Russia’s humanities does not reflect its abilities.  Russia’s first annual Asia-Pacific Economic Cooperation summit will be held in Vladivostok this week, a symbolic bid to present itself as ‘an Asia-Pacific state’.  Reuters evaluates the current visions in place for the country’s far east.

Moscow says it will retaliate if Britain, as reported, confirms that it has implemented its Magnitsky act.  The Foreign Ministry has published tax advice for companies paying bribes overseas.  Otkritie’s buyout of Nomos-Bank is being made possible by funding (‘not more than half’) from VTB.  A British phone service regulator has levied a $79,000 fine against Russia’s Connect Ltd for breaches of its code.  Russia’s RoMOS mobile operating system ‘has the look and feel of Android’ but prevents Google from downloading personal information from its users.

Will Ukraine’s move to introduce a new tax on car imports lead to a trade war with Russia?  Cyprus will not confirm reports that Russia has approved a €5 billion lifeline loan to buffer its two largest banks.  Alexander Brod, head of the Moscow Bureau for Human Rights, is on hunger strike in the lobby of the Public Chamber to protest the exclusion of candidates from the Kremlin’s rights council.

PHOTO: An activist from the youth movement of the Yabloko political party lights some of the 334 candles arranged to spell “Beslan” during a rememberence event in St.Petersburg September 3, 2012.  REUTERS/Alexander Demianchuk