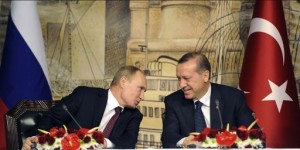 In Turkey yesterday on his first trip in two months, President Vladimir Putin slammed a NATO plan to place surface-to-air missiles on the Turkish-Syrian border, arguing that it would escalate tensions on both sides.  U.S. President Barack Obama hailed his country’s twenty-year disarmament partnership with Russia, praising the ‘extraordinary progress’ it achieved, and urging Russia to maintain joint efforts against nuclear terrorism  by updating the agreement before it expires in 2013 (Deputy Foreign Minister Sergei Ryabkov has indicated that Moscow intends to end the agreement).  Novaya Gazeta journalist Arkady Babchenko has been questioned by investigators over a February blog post that, they say, incited mass riots by urging protesters to ignore police orders.  A third criminal case has been opened against Leonid Razvozzhayev, this latest for his apparently fleeing Russia for Kiev in October with false documents.  The BBC flags the cases of Nikolai Lambin, Maxim Luzyanin, and Vladimir Akimenkov, all of whom have been targeted by police for their role in anti-Putin protests ahead of the elections.  It is also running a special report on the Kremlin’s crackdown on various facets of the opposition movement (protesters, liberal media, the Internet) since Vladimir Putin’s return to the presidency.

Roman Abramovich will buy 7.3% of Norilsk Nickel in a bid to end the feud between its main shareholders: Oleg Deripaska’s Rusal, and Vladimir Potanin.  Foreign ownership of Russian treasuries has more than doubled this year, boosting government bond prices, says Reuters.  ‘Russian lawyers do not currently have experience with the procedures for resolving disputes on WTO rules, so when such disputes arise, the Russian government will initially have to engage foreign law firms that have this experience.’  Russian Venture Co, the Kremlin’s Boston-based venture capital firm, is investing in ‘everything from online shopping avatars to breast cancer screening tools’, but is staying away from oil and gas.  A VTsIOM poll indicates that Gazprom is the most attractive potential employer for Russians.

The Russian Embassy in London has issued ‘an epic, 15-paragraph statement’ slamming the mainstream British press for, among other things, engineering the Crimean War. Animator Fyodor Khitruk has died in Moscow, aged 95.