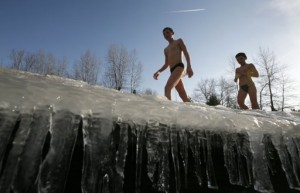 Opposition leader and anti-corruption campaigner Alexei Navalny says he will run for president in 2018, and wants ‘to change the life of the country’ by using Russia’s bounty of natural resources to improve living standards for the poor.  President Vladimir Putin is apparently prepared to respond to potential questions from German Chancellor Angela Merkel about ongoing NGO inspections.  Mark Knopfler, the founder of the British rock band Dire Straits, says he has canceled two upcoming Moscow concerts in protest against these recent ‘raids’ on foreign-funded rights groups such as Amnesty International and Human Rights Watch, as new reports reveal that the crackdowns include threats of $20,000 fines; a member of the Kremlin’s human rights council anticipates that ‘hundreds [of NGOs] will be fined or sanctioned in other ways’.  The Guardian speculates whether Russia’s abstention from voting on this week’s UN arms trade treaty was driven by its aims to boost arms deals with Africa.  Poland says it will not allow Gazprom to build and operate a second lie of the Yamal-Europe pipeline using its territory, saying that the job must go to a Polish state-owned investor.

Nordic telecom operator Tele2 sold its Russian business to state-run bank VTB yesterday.  Tele2’s options, says Reuters, were ‘narrowed to the point where […] shareholders were prepared to accept the lowest of the three offers to sell out’, leaving the company no choice but to make a ‘clean exit’ with VTB.  Bloomberg speculates on reports that Rostelecom may be privatised this year, amid rumors that VTB is planning to re-sell Tele2 to Rostelecom in six to eight months.  A privatisation roadmap for Russian Railways has been approved.  The Economist reports on Igor Sechin’s ‘teddy bear’, Rosneft, which is reportedly planning to use $10 billion in cash from TNK-BP’s subsidiaries to complete its acquisition of it, thereby ‘ignoring the interests’ of minor shareholders.  Rosneft is planning a joint LNG project with ExxonMobil.  Gazprom is teaming up with Royal Dutch Shell to drill for shale oil in western Siberia, in a deal to be agreed next week when President Putin visits the Netherlands.

The New York Times analyses Cyprus’ economic crisis and its impact on Russian money stashed there: ‘Russia suffers not so much from the Euro zone’s problems as its own outdated business practices.’  The Moscow Times interviews television journalist Vladimir Pozner on anti-Americanism, Soviet policies, and patrotism.

PHOTO: Members of a local winter swimming club brothers Alexander (L), 13, and Georgy, 10, Gliskov walk along a frozen bank after bathing in the icy waters of the Yenisei River in Krasnoayrsk, April 3, 2013. REUTERS/Ilya Naymushin