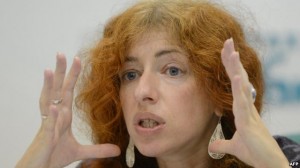 It has been revealed that a senior researcher for Human Rights Watch, Tanya Lokshina, has been the victim of a number of ‘severe threats‘ via text message.  Whilst such threats are, she says, habitual, recent ones were notable for an unprecedented ‘level of cynicism and meanness‘.  The rights advocate, whose work focuses on the Caucasus, suspects the involvement of security services given the highly personal information conveyed in the threats.  After initially refusing, Moscow authorities have now agreed to permit a memorial gathering for murdered journalist Anna Politkovskaya.  Natalie Pelevine examines unseemly business dealings between Russia’s richest men and Britain’s political elite.  The government apparently has plans to shore up gaps in the pension fund with money recuperated from tax dodgers.  A new report from Transparency International suggests that Russia’s top nine defense companies are failing to tackle graft.  A spokesman for the Russian Orthodox Christian Church has told the press that the church will permit clergy to run in elections where there are anti-church parties or candidates running for office.

In what the FT calls a ‘bold concession‘, Russia is considering allowing Western companies to own oil licenses in its Arctic waters, a move which would amplify its attractiveness to foreign companies.  Construction at Rosatom’s new $460 million nuclear fuel manufacturing plant in Ukraine is underway.

Russia has been informed by Syria that the death of five Turkish civilians across the border was a ‘tragic accident’.  The Kremlin has urged that a U.N. draft statement condemning the Syrian mortar attack be tempered.  The Guardian has some of the details of preparations for Vladimir Putin’s birthday on Sunday. He can apparently look forward to two NTV documentaries, one celebrating his leadership, one trashing the opposition.