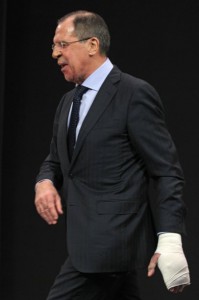 The Opposition Coordination Council, the opposition’s alternative governing body elected a month ago, is still struggling to unite around a common purpose.  Moscow authorities are refusing to sanction the Council’s requests to hold a rally on December 15.  Today marks a year’s anniversary since Moscow’s protest of tens of thousands; this article looks at how the political terrain has mobilised against dissonant voices since then.  The Washington Post puts a different spin on the same story, noting the growth of the protest movement.  The regional investigator who closed a criminal case against anti-corruption blogger Alexei Navalny has been dismissed from his post.  It is rumoured that Roman Abramovich was acting on behalf of the Kremlin in buying up 7.3% of Norilsk Nickel and thereby bringing an end to a long-standing ownership dispute at the company.  Abramovich now holds the company’s biggest voting stake, which he will pass on to an escrow account controlled by his investment company, Millhouse.

Foreign Minister Sergei Lavrov has indicated that Moscow is ready to improve relations with NATO by softening its stance on Syria, and said that Russia would grudgingly accept the alliance’s plans to station missiles along the Turkish border.  Apple has launched a Russian version of its iTunes store, offering ‘a limited selection of Russian songs’ due to copyright restrictions.  TNK-BP will invest $6 billion in two Krasnoyarsk oil fields over the next 8 years.  Testimonies for a fraud case at the company reveal ‘fear and mistrust’ among its upper echelons.  Putin ally Irina Yarovaya is planning to table an amendment in parliament to double the maximum jail sentence for corruption to 20 years.  A new Kremlin strategy paper (promptly disavowed by Kremlin sources) supposedly indicates that Putin is to abandon his macho image in favour of ‘that of a wise patriarch’.

The New York Times wonders why both Vladimir Putin and Sergei Lavrov are reported to have had sports injuries of late, as speculation continues to grow over the health of Putin’s spine: ‘Top Russian officials have long preferred to hide their illnesses, an instinct that can turn even minor ailments into global media events.’  The Russian Embassy in London continues its feud with The Guardian.

PHOTO: Russia’s Foreign Minister Sergey Lavrov, walks out the room with a bandage on his left hand after he spoke at a media conference during a meeting of NATO foreign ministers at NATO headquarters in Brussels on Tuesday, Dec 4, 2012. (AP Photo / Yves Logghe)