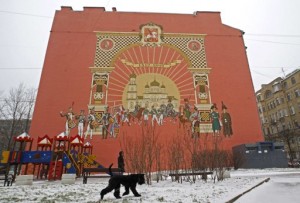 Members of the public are turning away from protest and instead using their energy to build new political parties, such as the December 5th Party, which takes its name from last year’s landmark mass anti-Kremlin demonstration.  A reported 100 people gathered in Moscow yesterday evening to mark the anniversary of the rally.  ‘Turning the tables’ again, the Foreign Ministry went after the EU for its lack of respect for human rights.  The government’s ongoing persecution of Leonid Razvozzhayev is written up in the New York Times as an insight into ‘Kremlin methods’.  Former Finance Minister Aleksei Kudrin has reportedly been receiving assistance from Alexei Navalny in getting the Coordination Council to listen to his suggestions.  Garry Kasparov spoke to the Washington Post about Putin’s dwindling popularity (‘if you can use that word’) and Russia’s need for a rule of law.  Alexander Perepelichnyy, the supergrass in the Magnitsky case recently found dead at his home in England, reportedly has links to a person suspected in the poisoning of Alexander Litvinenko.

Despite high-profile efforts with its anti-corruption campaign, Transparency International’s corruption index still ranks Russia in the bottom third (Yelena Panfilova called it ‘the zone of national shame’), equal with Kazakhstan and Iran.  Credit Suisse is closing its Moscow investment banking arm as part of a bid to cut costs.  Sberbank posted higher-than-expected quarterly results, but could be taking on too much exposure to free-spending customers to get them, says Reuters.

A new book of stories by prisoners reveals the contemporary state of prison conditions for female inmates.  Jailed Pussy Riot member Maria Alyokhina is facing disciplinary action at her penal colony for failing to wake up on time, and a punishment could ‘be used to deny Alyokhina parole’.  A slightly higher number of births than deaths has been reported this year for the first time since the fall of the Soviet Union.

PHOTO: A dog walks past a mural creation called “The 200th anniversary of the Russian army victory over Napoleon” in St. Petersburg November 29, 2012. (ALEXANDER DEMIANCHUK/REUTERS)