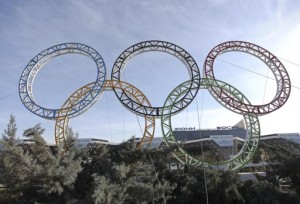 President Vladimir Putin promised Olympic chiefs that Russia will be ready in time to host the Winter Olympics in Sochi next year, saying that work is ‘overall’ on schedule, but also appeared on television sarcastically slamming government officials for a delayed ski jump facility and a 600% increase in costs.  The Moscow Times has a rundown of the major tasks that have yet to be completed.  Meanwhile Human Rights Watch are alleging that migrant workers at the Sochi site are being exploited through the illegal withholding of pay and lack of housing. ‘People work, they don’t get paid, and leave. Then a bus comes and unloads a fresh group of workers to repeat the cycle.’ A myriad of criticism also includes ecologists’ arguments that the building project is destroying local wildlife.  The BBC spoke to Vladimir Potanin about his financial backing of the games as ‘payback’, and the importance of changing the image of Russia’s rich.  The St. Petersburg City Court has upheld the rejection of an $11 million lawsuit against Madonna for violating local laws banning ‘homosexual propaganda’.  Konstantin Dolgov, the rights ombudsman at the Foreign Ministry, says that new measures to approve same-sex marriages in France and Britain ‘reduces the opportunities for citizens of those countries to adopt Russian children’.

The British Supreme Court has refused an appeal by VTB to have its fraud case heard in the U.K. due to the ‘strength and importance’ of the case’s ‘Russian connection’.  Eleven Russian NGOs have lodged a complaint with the European Court of Human Rights over the recent law demanding that they label themselves as ‘foreign agents’.  U.S.-based Freedom House wants President Barack Obama to abandon the ‘reset’ policy, due to Putin’s view of power relations ‘in zero-sum terms’.  Garry Kasparov has slammed Goldman Sachs’ recent deal to boost Russia’s financial image, saying that it ‘ranks among the worst examples ever of a company seeking to bolster its profits by laundering the financial reputation of a country led by a corruptly elected despot’.  The central bank has defended its reluctance to ease current policy, saying that its financial conditions are ‘neutral’ and that current growth is in line with potential.  Deputy Prime Minister Dmitry Rogozin suggested that Russia would be interested in a long-term military partnership with Brazil.  Last year marked Russia’s 20th consecutive year for a decline in population.

Left Front leader Sergei Udaltsov got into a fistfight with ‘several Other Russia activists’ at a memorial service for member Alexander Dolamtov, who committed suicide in Holland after being refused asylum.  A further suspect has been arrested on charges connected to the May 6 rally last year – charges that Dolmatov wanted to avoid. The suspicious conditions of his death have provoked suspicion among his fellow activists.  Jailed former Yukos head Mikhail Khodorkovsky, in a recent interview, accused President Putin of using political repression to reassert his authority, comparing his rule to that of the late Soviet leader Leonid Brezhnev.  Soldiers serving in the Sakhalin region have complained of being served maggot-infested food for over a month.