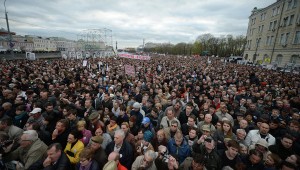 An estimated 20,000 people gathered in Moscow’s Bolotnaya Square yesterday, calling for the release of political prisoners being held for participating in opposition activities.  Police estimates put the number of protesters at 8,000 (the same number estimated for the much larger 2012 protest), with other estimates ranging between 10,000 and 50,000. ‘I thought there would be more of us here.  Lots of people are afraid, I guess.’  RFE/RL has press images of the protest, and the New York Times has compiled various social media images and tweets.  Only a handful of people were detained.  Anti-corruption blogger and opposition figurehead, Alexei Navalny, who is currently facing trial for his political activities, took to a stage to address the crowd, urging protesters to ‘throw [Putin] out of the Kremlin’ and chanting ‘Russia will be free!‘  (His full speech was translated and is available here.) The protest went ahead despite the death of Maxim Melkov, a volunteer who was killed whilst installing sound equipment for the stage; proceedings opened with a minute of silence for him. Organising committees for the pro-Kremlin All-Russia People’s Front are to be opened in all regions before the end of the month.

U.S. Secretary of State John Kerry is in Moscow this week, where he will renew his attempts to work with Russia to find a political solution to end violence in Syria.  A Foreign Ministry spokesperson says Russia is ‘seriously concerned’ by indications that foreign intervention in Syria is becoming increasingly likely.  Former Duma deputy Vladimir Ryzhkov discusses some of the current obstacles to business that are, he says, damaging both the domestic and investor climates.  Azerbaijan’s state oil fund is to invest $500 million in a new VTB share offering.  Under a new directive signed by Prime Minister Dmitry Medvedev, Gazprom will get 1.0 trillion cubic meters of natural gas stored in more than four Arctic reserves.  Medvedev says that current rearmament levels are on a par with those of the Soviet Union at the end of World War II.

Independent pollster the Levada Centre has been told that it must register as a foreign agent, after prosecutors determined that it received foreign funding.  The hooliganism trial of media tycoon Alexander Lebedev, which he says is part of a broader political clampdown on opponents of Vladimir Putin, begins today.  A senior Vice President at the Skolkovo Foundation, Alexei Beltyukov, has been suspended following the opening of a criminal case against him regaring payments he made to opposition lawmaker Ilya Ponomaryov for a series of lectures.  Is the Kremlin cracking down on VKontakte because it is used as a platform for dissent?