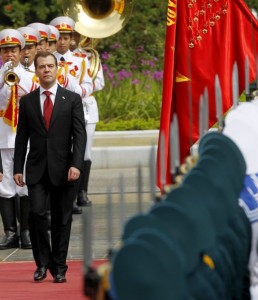 President Vladimir Putin’s firing of Defense Minister Anatoly Serdyukov and replacing him with Moscow Governor Sergei Shoigu was likely the result of an ongoing investigation into corruption allegations surrounding the Defense Ministry’s sale of military real estate to civilian companies.  Putin said he was dismissing Serdyukov ‘in order to create the conditions for an objective investigation of all the related issues’.  Shoigu’s new appointment means that he will lose the gains accrued during his previous post, where he was apparently seen as ‘a breath of fresh air’.  The Moscow Times sees Shoigu as ‘a fitting choice’ to replace Serdyukov, but that it shows the Kremlin’s ‘limited supply of skilled officials’.  One of the conspiracy theories currently making its way around the Internet is that Serdyukov’s sacking was retaliation for his offending his wife’s father, former Prime Minister Viktor Zubkov, by having an affair.  Journalist Oleg Kashin says he has identified one of the people who attacked and brutally beat him two years ago as a security guard at a pro-Kremlin youth camp on Lake Seliger.

A report by Russia’s Central Election Commission says that the U.S. presidential election was neither free nor fair, and fell short of all international election principles. ‘Some view it as an answer according to the tit-for-tat principle, and it truly looks like it.’  A victory for Obama has led to a jump in Russian stock futures, due to the anticipation that his continued leadership will spur a rally in oil prices.  Gas producer Novatek has acquired a 49% stake in Nortgas for $1.38 billion.  Poland’s PGNiG scored a victory and a boost in share price after Gazprom agreed to cut its supply fuel prices, ending a long-standing legal dispute.

The government may continue to expand its role in the economy through state-owned companies, ‘cash cows’ that finance large-scale social projects.  An official website allows users to query whether individual websites have made the Kremlin’s secret blacklist of blocked websites, but the full list is not being revealed.

PHOTO: Russia’s Prime Minister Dmitry Medvedev reviews the guard of honour during a welcoming ceremony at the Presidential Palace in Hanoi November 7, 2012. (KHAM/REUTERS)