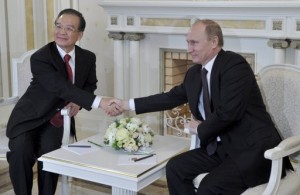 The United States Senate passed its combined human-rights-trade bill yesterday, voting 92 to 4 to establish permanent normal trade relations with Russia; under the same bill, Russian officials linked with the death of anti-corruption lawyer Sergei Magnitsky will be blacklisted. The foreign ministry called the U.S. vote ‘a performance in the theater of the absurd’.  Russian authorities are planning to start publishing a blacklist of tax dodgers to target those who are overdue on their payments.  26-year-old Kazbek Gekkiyev, a journalist at a state-run television channel, has been shot dead in the North Caucasus capital Nalchik, in the Kabardine-Balkariya province.  The killing is thought to be linked to his work, although nothing has been confirmed; witnesses say the men who killed Gekkiyev only asked him for his name and profession.  President Vladimir Putin urged police to find and punish those responsible for his death.

A member of the Kremlin’s human rights council compared the prison in Chelyabinsk, the site of a recent inmate riot, to a concentration camp, saying that the council was convinced that the rioting prisoners’ claims had been accurate.  Foreign Minister Sergei Lavrov and U.S. Secretary of State Hillary Clinton ‘bickered’ openly at a meeting of the Organization for Security and Cooperation in Europe, each accusing the other’s government of failing to comply with OSCE principles.  At a separate meeting, Clinton referred to Russian-led efforts for regional integration, such as the Eurasian Union, as ‘a move to re-Sovietize’ Eastern Europe and Central Asia.  ‘Russia has become Turkey’s top trading partner.’

Gazprom says construction on the underwater section of the South Stream pipeline will begin this week; but some expert sources are doubting this estimate, suggesting that construction couldn’t possibly begin until 2014 at the earliest.  Rosneft and ExxonMobil signed a joint exploration agreement yesterday for fields in Western Siberia.  Mikhail Gorbachev talks to the Moscow Times about the end of the Cold War, which has its 25th anniversary this Saturday.