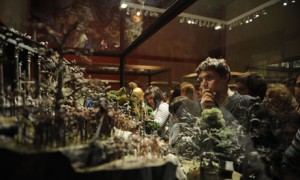 Russian prosecutors have launched a probe into whether the Chapman Brothers’ exhibition at St Petersburg’s Hermitage Museum is breaking the country’s extremism laws (the same which Pussy Riot allegedly contravened) after a number of Orthodox Christians and Cossacks complained about the controversial works.  Foreign Minister Sergei Lavrov hopes to see prompt multiparty retaliation to the Magnitsky Act, a set of U.S. sanctions described by a presidential aide as ‘an extremely unfriendly move‘.  Russia’s decision to restrict U.S. meat imports, which are worth $500 million a year, has nothing to do with the list, the Kremlin says.  39% of Russians approve of the Magnitsky sanctions; there are calls for the EU to adopt similar measures.  Will the legislation prompt a major decline in US-Russia relations?  Some analysts think not.  British police have been accused of failing to investigate the campaign of intimidation preceding the murder of Hermitage whistleblower Alexander Perepilichnyy.

Heavily indebted miner Mechel has bought 55% of the strategic Pacific port of Vanino. U.S. oil giant Exxon Mobil will spend up to $300 million on a pilot project with Rosneft to investigate hard-to-access oil resources in western Siberia.  Alisher Usmanov’s MegaFon has purchased 50% of Euroset Holding in a deal that will considerably expand the number of retail outlets the handset vendor works from.  Russia is hoping to ensure greater government regulation of the Internet with a re-write of the International Telecommunication Union treaty.  Kazakhstan wants to see the city of Baikonur, which hosts Russia’s main rocket launch center, return to local jurisdiction.

On International Anti-Corruption Day, the Investigative Committee announced that the state budget lost $256 million to graft in the first ten months of the year.  Prime Minister Medvedev, caught unawares off-mic, apparently has referred to members of the committee as ‘jerks’ and voiced an issue with Putin’s punctuality.  The Daily Beast examines the rapidly growing anti-Mormon movement in Russia.  The protest movement, one year on: Brian Whitmore’s podcast invites discussion on the triumphs and limitations of civil society.

PHOTO: Visitors at the Hermitage museum in St Petersburg, Russia, for the opening of Jake and Dinos Chapman’s The End of Fun. (Shamukov Ruslan/ITAR-TASS)