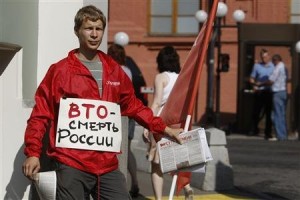 The Duma has voted to back Russia’s entry to the World Trade Organization, as a top economic minister suggests that joining could cost Russia $13.5 billion.  It has also ratified a long-awaited treaty on US adoption, designed to protest children from incidents such as the 2010 scandal when a US mother sent her 7-year-old son back to Russia on a plane with a note.  A vote on a controversial bill to restrict internet access (a move widely compared to ‘China’s great firewall’) has been postponed after a widespread outcry (Alexei Navalny called it ‘ideological warfare’).  The threat of such a bill is hammering the share price of search engine Yandex.  The Duma could re-criminalise ‘libel’.

Alexander Lebedev suggests that the widely-criticised ongoing imprisonment of Pussy Riot is related to the courts’ fear ‘that they might offend someone in the vertical’.  Kyrgyzstan’s Defense Ministry is going to raise its rent on three Russian military bases, blaming ‘inflation’.  Vladimir Frolov calls for Emergency Situations Minister Vladimir Puchkov to leave his post in the wake of the Krasnodar floods, which killed 170 people.  The Washington Post has some striking images.  Many are angry at the poor coverage of the disaster on state television.