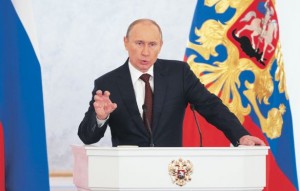 In his state of the nation address, Vladimir Putin has pledged to fight corruption within the elite, firmly supporting measures to prevent state officials from holding bank accounts and assets abroad, in a promise to ‘‘de-offshore‘ our economy‘.  In the speech, described by one analyst as ‘overly general, uninspired and paternalistic’, he also endorsed the introduction of a sumptuary tax on sports cars and other luxury goods.  In a nod to the Orthodox Church, the President affirmed the need to promote ‘traditional values’ to counterbalance the lack of ‘spiritual braces’ witnessed in contemporary society.  To battle demographic deficit, the leader recommended that ‘the three-child family […] become the norm in Russia’.  Ria-Novosti has an overview of the points made.  The Guardian offers a video clip from the speech in which the President warns against foreign ‘meddling’ in domestic affairs, in defence of the recent bill limiting the work of foreign-backed NGOs.  On this topic, the pro-democracy International Republican Institute, funded by U.S. taxpayers, has decided to pull out of Russia.  The Saratov branch of the No to Alcoholism and Drug Addiction NGO is also under threat, the Moscow Times reports.

After three days of negotiations, Moscow municipal authorities have refused to sanction the planned opposition Freedom March, which organizers hoped would attract up to 50,000 people.  Prosecutors have requested a 12-year prison term for an ex-police officer over his suspected role in the 2006 killing of investigative journalist Anna Politkovskaya.  The victim’s two children, who oppose the move on the basis that the policeman’s plea bargain obfuscates the process of finding her killer, have no right to challenge the deal.

Russia’s Foreign Ministry continues to criticize US adoption practices.  Rosneft has finalized a deal to buy 50% of TNK-BP from the AAR consortium for $28 billion in cash.  President Putin has vetoed legislation making changes to Prime Minister Medvedev’s pet project, the Skolkovo innovation hub, indicating a potential rift in the one-time tandem.  Renault-Nissan has signed a long-awaited deal to take over Russian carmaker Avtovaz by 2014.  Among its goals: reinventing the classic Lada for the Russian market, which is poised to be the largest in Europe by 2014.

PHOTO: President Vladimir Putin in the Kremlin on Wednesday delivering his first state-of-the-nation address since returning to the presidency this year.  (Alexander Zemlianichenko/AP)