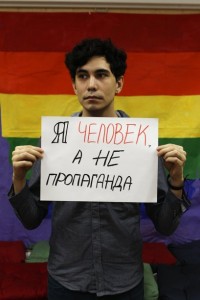 Gay rights activists in St. Petersburg have announced that the city will take part in the International Day Against Homophobia on May 17, despite the city’s law’s banning ‘homosexual propaganda’.  LGBT rights group Vykhod has reportedly received permission to hold a rally.  Three men in Volgograd are being questioned in connection with the brutal murder of  Vladislav Tornovoi last week, thought to be connected with his alleged homosexuality (the victim’s family denies he was gay).  The murder is part of a much wider problem of intimidation of and violence against gay people, rights groups say.  Having already fined it last month for activities relation to ‘functions of the foreign agent’, the Justice Ministry has now opened a case against independent election watchdog Golos for failing to register itself a ‘foreign agent’.  Two alleged nationalists have been detained, in Serbia and Ukraine respectively, on suspicion of involvement in ‘a number of high-profile murders’ including that of lawyer Stanislav Markelov in 2009 and judge Eduard Chuvashov in 2010.  The two reportedly are members of the Militant Organisation of Russian Nationalists.

Deputy finance minister Sergei Storchak spoke about restoring investor confidence and trust as ‘the biggest issue’ facing Russia.  Vladimir Putin may have called former Finance Minister Alexei Kudrin ‘a slacker’ during his television interview last month, but Kudrin is right to point out that the root of Russia’s economic slowdown are internal, says this piece.  Interest rates will not budge this month, due to accelerated inflation.  Under a new decree signed by Prime Minister Dmitry Medvedev, all major state-funded investment projects will be subject to independent audits, a bid to curb overspending.  Israeli Prime Minister Benjamin Netanyahu will meet with President Putin will this week, and likely will urge him to cancel planned deliveries of missile systems to Syria.  Ukraine has suspended chicken exports to Russia whilst it investigates allegations of contamination.

‘The ruling elite has little to fear from the opposition, but that does not mean it has a rosy future ahead’, writes Boris Kagarlitsky.  Masha Gessen documents a Moscow bicycle protest: ‘It is hard to arrest people on bikes.’  The forensic experts’ conclusion that the acid attack on Bolshoi director Sergei Filin caused him serious bodily harm may affect the outcome of the sentencing for those suspected.

PHOTO: Albert, a gay rights activist, holds a board that reads “I’m a person not propaganda” inside the LGBT organisation called “Vikhod” (EXIT) in St. Petersburg February 14, 2013. REUTERS/Alexander Demianchuk