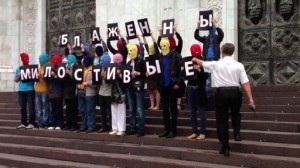 Five activists were detained yesterday at a peaceful flash mob at the Christ the Saviour Cathedral in Moscow, where a group of 18 held a sign reading ‘Blessed Are The Merciful’ to support the cause of Pussy Riot.  ‘Beating people up for quoting the gospels on the steps of the Christ the Saviour Cathedral – priceless,’ the group’s lawyer, Nikolai Polozov, wrote on his Twitter feed yesterday.  The six Moscow judges involved in the case all have links to Yukos trials, according to a report in The New Times.  Trials of protesters who face heavy jail time for alleged participation in the May 6 rallies, such as Artyom Savyolov, are going unnoticed in the deluge of press about Pussy Riot, says RFE/RL.  The verdict will be announced tomorrow in downtown Moscow at 3pm local time.  ‘The Pussy Riot case is hardly a sign Russia has changed in an investment-friendly way. The shaky rule of law has been one reason—along with excessive bureaucracy and corruption—why Russia languishes at 120th in the World Bank’s index for ease of doing business.’

A Syrian government envoy has praised Russia and China for not being ‘colonisers’, as Russia accuses the West of reneging on its agreement to establish a transitional government in Syria.  The Mayor of Khimki, Vladimir Strelchenko, accused of ordering attacks against those who opposed the highway through the Khimki forest, has resigned.  In a blow to environmental campaigners, the Baikal Pulp and Paper Mill’s right to dump sewage into Lake Baikal has been extended until August of next year.  A consortium led by ExxonMobil and Royal Dutch Shell has been selected to develop the Skifska field in Ukraine, beating Russia’s Lukoil.

Steel pipe maker TMK expects to win its planned lawsuit against a European Commission decision to extend import tariffs on seamless pipes through to 2017.  The Moscow Times interviews Alexander Kargaltsev, one of a handful of gay Russians granted political asylum in the U.S.

PHOTO: Russian security guards broke up a demonstration Wednesday in support of protest punk group Pussy Riot outside the Moscow cathedral where the women performed this year. The sign reads ‘Blessed are the merciful’. (AFP Photo)