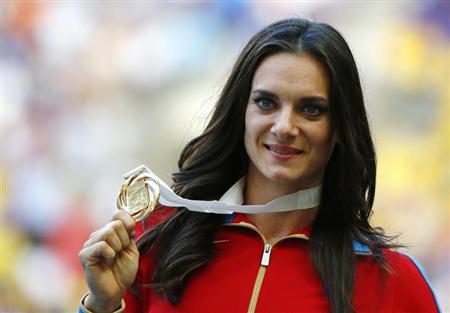 Moscow has tightened its checks on all imports from Ukraine, with producers complaining of a sudden intensity in customs inspections at Russian borders.  These checks began last month after President Vladimir Putin failed to persuade Ukraine to abandon its plan to join the European Union, causing many – including Prime Minister Mykola Azarov – to speculate that the tougher borders are a bid to pressure Ukraine on the issue, and sparking fears of a trade war.  Over the past three years, Russia has won the lion’s share of India’s $38 billion defense spending.  A defendant in the ongoing Anna Politkovskaya murder trial was shot in the thigh this week.  The official investigation into the murder of activist and journalist Natalya Estemirova has been extended again, continuing until October 14.

World pole vault champion Yelena Isinbayeva spoke out in support of Russia’s anti-gay laws, criticising fellow competitors at the World Athletics Championships for sporting rainbow coloured nail-polish in support of the LGBT community. ‘If we allow to promote and do all this stuff on the street, we are very afraid about our nation because we consider ourselves like normal, standard people.’  After winning a medal at the championships, U.S. runner Nick Symmonds became the first international athlete to speak up against the ‘gay propaganda’ law on Russian soil.  A co-host of the Miss Universe pageant has pulled out of the event (to be hosted in Moscow) in protest of the law.  Outspoken anti-Kremlin activist and socialite Ksenia Sobchak gave a controversial interview to Dozhd-TV this week in which she accuses Yelena Mizulina, the author of the law, of wanting to ban oral sex in Russia.

State-owned monopolies will be required to disclose all information about their investments, provided that it does not leak government secrets, in a bid to gain transparency about low profitability.  ‘Gross violations’ in massive state contracts are a regular occurrence, the Audit Chamber has found.  Burger King Russia is struggling to explain the thinking behind a new advertisement that appears to compare Whoppers to opiates.