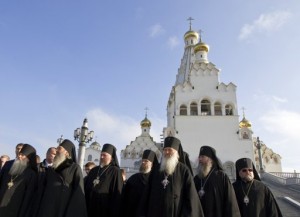 Independent watchdog Golos says it received 850 reports of violations in Sunday’s elections.  President Vladimir Putin says that he was not surprised by the election results, and that they are evidence that the electorate trusts the government.  ‘I consider this, after the presidential elections, to be one more serious step towards strengthening Russian statehood and the creation of conditions for energetic, effective development in the coming years,’ he said.  But opposition figures contest the fairness and legality of the elections, sharing videos of hidden voter lists and ballot-stuffing, and reports of voting carousels, among other suspected violations.  The confidential ‘managed democracy’ campaign strategy of Novgorod’s candidate, Sergei Mitin, was apparently leaked on the Internet.  Reuters notes the lack of a street protest in response to the results, quoting one political analyst as saying that such a thing ‘is out of the question now’.  Two of the 17 suspects thought to have disturbed the peace at the March of Millions on May 6 have been charged and face prison, and Vladimir Ryzhkov anticipates that ‘Putin will continue his strategy of intimidating society and the opposition by jailing rank-and-file activists on trumped-up charges of extremism or participation in mass riots’.

Reports say that investors behind MegaFon’s share sale are seeking a valuation of over $10 billion.  Housing and utilities tariffs are the main concern of Russian householders, according to a new survey.  Muslim families in Stavropol say their daughters have been prevented from wearing headscarves at school.  Foreign Minister Sergei Lavrov says that European airlines will have to obtain multiple-entry visas for their crew if the E.U. does not scrap its visa policy for Russian officials.

PHOTO: Orthodox clergy meet Kirill, the Patriarch of Moscow and All Russia, during his visit to the Belarussian capital of Minsk October 14, 2012. REUTERS/Vasily Fedosenko