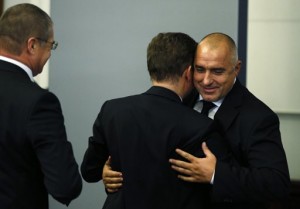 The recent emergence of two large-scale official corruption cases and the accusations linked to them is ‘overwhelming’, with more cases on the horizon, says BSR.  The Moscow Times says the Kremlin’s anti-corruption drive has much in common with Alexei Navalny’s project, but some sources are doubting that any ‘big heads’ will actually roll over corruption allegations, and others say that the recent high profile dismissal of Anatoly Serdyukov (and the broader reshuffle it has inspired) ‘was related less to corruption and more to infighting among powerful factions within the political elite’.  Dozens of protesters gathered outside the headquarters of the Investigative Committee yesterday to demand the release of Leonid Razvozzhayev and Konstantin Lebedev from prison.  Dmitry Pavlyuchenkov, one of six suspects charged in connection with the murder of journalist Anna Politkovskaya, has had his case sent to court.  Russia says it is ready for non-political talks with NATO on limiting conventional military forces in Europe.  German Chancellor Angela Merkel is visiting Vladimir Putin today, with a showdown over human rights expected.  China’s new leadership of ‘older and conservative officials’ could bode well for relations with Russia, says the Foreign Ministry.

A Gazprom-led consortium voted yesterday to complete the South Stream pipeline, showing the company’s ‘determination to hang onto its core European market’.  The Guardian considers Gazprom’s recent demise, a series of losses and lawsuits that have left it ‘confronted with a future where it may no longer be able to dictate long-term pricing contracts, shut supply valves on a whim and hold much of Europe in its grip’.  Traders say that Dmitry Medvedev’s decision to scrap daylight savings time last year is hampering Russia’s plans to have a greater global role in finance.  The Kremlin’s refusal to discuss Vladimir Putin’s health issues is worrying investors who say that Putin is needed as a guarantor of stability.  Capital drain from Russia could reach $65 billion this year.  The BBC investigates the plight of Moscow’s migrant and trafficked workers.

Mail.ru wants to buy VKontakte, the online social network, but is waiting on ‘the right price’.  Russia’s preference for new Georgian leader Bizdina Ivanishvili may see it restoring Georgian wine and water to its markets.