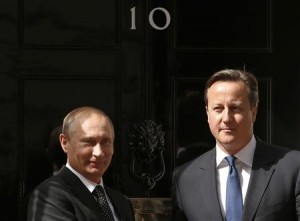 Kremlin critic and anti-corruption campaigner, Alexei Navalny, won the PARNAS party’s backing to run as a candidate in the Moscow mayoral elections in September, but the ongoing trial against him could make his running impossible. ‘I’m running in the elections to rip our city out of the pincers and tentacles of Mr Putin, Mr Sobyanin and the United Russia party.’  Exiled liberal economist Sergei Guriev and his wife say they will help Navalny, ‘a worthy candidate’, to his economic program.  Billionaire-turned-politician Mikhail Prokhorov, who pulled out of the mayoral race, is challenging Navalny’s credentials, questioning his nationalist leanings, and positing that he wouldn’t be able to ‘cope with the task of building up a management team’ that could run Moscow.  Like acting Mayor Sergei Sobyanin, Navalny indicated that he was unhappy with the prevalence of illegal immigrant workers in the city.  He will still have to pass the ‘municipal filter’ of collecting deputies’ signatures in order to run.  President Vladimir Putin met in London with UK Prime Minister David Cameron yesterday, accusing him of betraying humanitarian values by supporting Syrian rebels who ‘kill their enemies and eat their organs’, although he acknowledged that both sides have blood on their hands.  Cameron acknowledged ‘very big differences’ in their interpretation of events thus far, but said that the two would work together on their common ground, in that they ‘both see a humanitarian catastrophe’.  Peace talks will take place next month in Geneva.

President Putin said that he would welcome improvements to the controversial ‘foreign agent’ law, saying that he wanted to make sure that it ‘doesn’t get in anyone’s way’.  An appeal by Golos against the $10,000 fine imposed on it for failing to register as a ‘foreign agent’ has been rejected by a Moscow court.  Putin congratulated Hassan Rouhani on winning Iran’s presidential election yesterday.  Vladimir Putin’s spokesman Dmitry Peskov denies that Putin stole a diamond-encrusted Super Bowl ring from American businessman Robert Kraft.  ‘This is a funny, humorous story that Kraft likes to tell for fun,’ said Kraft’s spokesman. ‘[H] e respects Putin for the modernization of the Russian economy.’