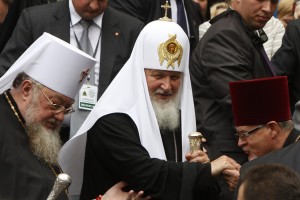 ‘Something unbelievable is happening for modern Russian politics: the demanding, stubborn, authoritative and consistent impact of society on the authorities. […] Whatever the verdict for Pussy Riot, we and you have already won’: the words of band member Nadezhda Tolokonnikov.  The verdict on the trio’s punk prayer, for which the prosecution seeks three years, will be announced at 11am GMT.  Paul McCartney has penned an open letter in support of the girls’ protest action.  Despite a swell of international support, Russian stars are less inclined to support the band.  The judge in the trial has apparently been given state protection after receiving threats from undisclosed parties.  On a visit to Poland which threatens to be overshadowed by the court case, Patriarch Kirill has done his best to emphasise the autonomy of church and state, amid allegations of their growing complicity.

Madonna, who openly supported Pussy Riot and the gay community at her recent Russian concerts, may face a $10.5 million lawsuit by activists who claim her acts inflicted ‘moral damage‘ on them.  A member of the Other Russia party has filed a complaint with the police after an FSB officer allegedly threatened him with deportation in an attempt to turn him into an informant.  Gazprom Neft Shelf denies that its Arctic rig is an environmental risk.  The number of Russian voters has fallen by nearly three quarters of a million since the March 4 presidential election: ‘seasonal fluctuation’ or fictitious voters?

Vladimir Nesterov, a senior figure at the Khrunichev State Research and Production Space Center, will resign after a spate of mishaps in the space industry.  The head of the Federal Space Agency has announced the body may become a state corporation.  Moscow has warned the U.S. of the negative effects of a speedy U.N. withdrawal from Syria. Russia will apparently be allowed to keeps its military base in Kyrgyzstan for another 15 years.