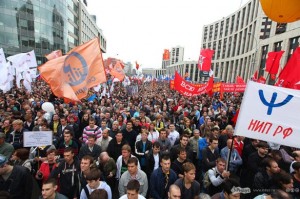 The State Duma, in a United Russia-backed vote, stripped Kremlin critic Gennady Gudkov of his seat on Friday, ostensibly for engaging in unlawful entrepreneurship. ‘The case is not about me. You have triggered a mechanism that will destroy the state, and we will all be responsible for it.’  A full transcript of his closing speech is here.  Tens of thousands of people marched in Moscow for Saturday’s ‘March of Millions’: police estimated the crowd at 14,000, opposition leaders said over 100,000, and many say the number was closer to the 25,000 permitted by Moscow officials (AFP has a round-up of the various claims).  The crowd expressed outrage over Putin’s rule, the jailing of Pussy Riot, and the ouster of Gudkov, who, along with opposition leaders Alexei Navalny and Sergei Udaltsov, spoke at the rally, saying that ‘Russia no longer has a constitution’.  Udaltsov says he was arrested at the close of the protest.  Supporting marches were held in St Petersburg, and in Yekaterinburg.  Putin’s former ally and ex-finance minister Alexei Kudrin spoke out against Russia’s current cracking down on opposition leaders, calling it a ‘worst-case scenario’.

Sberbank has launched its sale of a 7.6% stake, which could take over $5 billion.  The E.U.’s Energy Commissioner is sticking by the investigation into Gazprom, saying that Russia must follow the rules and stop varying its prices for different customers: ‘Vladimir Putin knows very well that Russia has to accept the rules of our internal market with 500 million consumers. It’s the biggest business case for Gazprom.’  The top challenger to United Russia in Ryazan’s gubernatorial election has pulled out of the race and endorsed his rival, ‘cast[ing] further doubt on the Kremlin’s willingness to hold free and fair gubernatorial elections this autumn.’  A group of Duma deputies is developing a bill that would criminalise blasphemy ‘and anything else that offends religious believers’.

Masha Gessen writes candidly on her meeting with Vladimir Putin over her being fired from her job at a travel magazine for refusing to cover his crane flight. ‘I like kitties and puppies and little animals,’ he apparently told her.