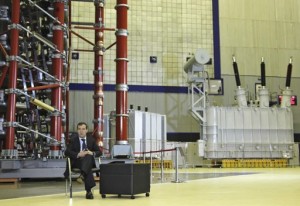 The Investigative Committee has opened a criminal case against Sergei Udaltsov, who will be charged with organising ‘mass disorder’ and could face ten years in prison, the result of a secretly recorded conversation aired on national television earlier this month.  The criminal case comes with a warning to protest leaders not to ‘underestimate the Russian special services’ professionalism’, and other opposition leaders implemented in the case include Konstantin Lebedev.  As part of this ‘unprecedented crackown’, the Investigative Committee’s probe of Mikhail Kosenko – also for instigating mass disorder – has concluded with a request to send him to a mental health institute.  The Committee also says it has completed its preliminary investigation into the murder of Anna Politkovskaya, for which five people have been charged.  The trial is expected to take another six months at least to come to court.  United Russia deputy Alexei Knyshov says that accusations about his alleged unlawful business activity are ‘groundless’.

President Vladimir Putin wants security forces to prevent terrorist attacks on Russia’s major upcoming sports events.  The AAR consortium says it plans to submit a ‘competitive’ cash bid for BP’s share of TNK-BP today, the final day of a 90-day period of good faith that prevents BP from signing a deal with any other parties – although Rosneft is also said to be submitting a bid.  Lukoil’s chief executive has urged AAR to stay ‘flexible’.  A failed gagging attempt could see a former TNK-BP employee releasing evidence of ‘high-level corruption in the company and in government’.  Putin has dismissed Oleg Govorun, his Minister of Regional Development, apparently for not implementing his decrees.  Sberbank’s $1.5 billion, three-year syndicated loan is the largest of its kind in central and eastern Europe this year.  Promsvyazbank has abandoned its planned IPO in London and Moscow for a second time.  The E.U.’s probe of Gazprom is not affecting the South Stream project, says Eni’s chief.

As part of his crackdown on smoking, Prime Minister Dmitry Medvedev wants all tobacco ads to be banned.  The Orthodox Church is teaching teenagers Parkour.