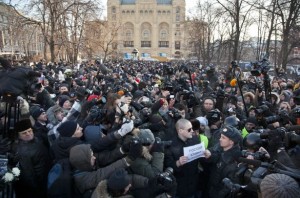 Police have detained around 40 people, as well as protest figureheads Alexei Navalny, Sergei Udaltsov, Ilya Yashin and Ksenia Sobchak, at an unsanctioned rally in Moscow on Saturday to mark the first anniversary of last year’s mass protest actions.  Turnout figures vary: one source claims 2000 people attended, others put the figure in the hundreds.  The Moscow Times describes the rally as ‘puny’, at least in comparison with those held last year.  Left Front leader Sergei Udaltsov has acknowledged that the next effort, which should take place, he believes, in spring, requires ‘very powerful preparation’.  About 600 people participated in a twin rally held in St Petersburg.  United Russia has proposed increasing wages for employees of the opposition-quashing Investigative Committee by 175%.  Corruption battler Alexei Navalny, along with his brother, is facing a second criminal investigation on accusations of stealing $1.8 million from a trading company.  Environmental activist and Putin aggravator Suren Gazaryan has been put on a federal wanted list.  Interior Minister Vladimir Kolokoltsev has announced that a second suspect in the murder of broadcaster Kazbek Gekkiyev in Kabardino-Balkaria has been identified.  Since the collapse of the Soviet Union, a total of 341 journalists have been murdered or reported missing in Russia, the domestic media has reported.  U.S. President Barack Obama has signed into law permanent normal trade relations with Russia, along with the Kremlin-irking Magnitsky bill.  The state duma has approved a response to the Magnitsky bill in the draft legislation’s first reading.  Russia has rebuffed reports that it has shifted its position on the Assad regime in Syria.

The Telegraph reports on AAR consortium heavyweight Mikhail Fridman’s post-TNK-BP plans.  In a new deal, Russia will sell up to 14 helicopters to a Brazilian company for use in offshore oil drilling projects.  Russia and Georgia are apparently making initial steps towards restoring ties.  Former KGB agent and CEO of Norlisk Nickel, Vladimir Strzhalkovsky, is set to receive Russia’s largest ever golden parachute pay-off, at $100 million.  The state duma has said an initial yes to no smoking in public places.

PHOTO: Opposition leader Sergei Udaltsov holding up a sign reading “Russia will be free” in front of a policeman at Saturday’s unsanctioned rally at Lubyanka, December 14, 2012. (Igor Tabakov/MT)