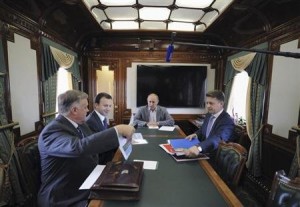 The 17th St. Petersburg International Economic Forum begins today, with the theme of global economy – the Moscow Times is posting live updates, thus far on capital outflow, Russian Railways, and the privatisation of Rostelecom.  A Russian network of sham companies has been found responsible for the illegal flight of $24 billion from Russia from 2010 to 2012, according to the Central Bank.  Talk of any strong devaluation of the rouble is ‘not appropriate’, according to Vladimir Putin’s spokesman, as the Central Bank discusses its main objective ‘to support a lower and stable rate of inflation’.  Gazprom is working towards an agreement with China, to be signed in September, to provide long-term gas supplies, and Russia is to increase its oil supplies to China by 13% for the next three months: ‘Russia has been losing its interest in Europe, where oil consumption is stagnant.’   The Finance Ministry has canceled a planned sale of 15-year rouble bonds – its second auction cancellation this month.  Rosneft head Igor Sechin will address shareholders today to discuss the company’s 19% loss of share value thus far this year.

Aksana Panova, the head of Russian news website ura.ru, is facing four criminal charges carrying up to 15 years in prison, with her supporters alleging that her persecution is political and tied to her offending the authorities.  Brian Whitmore says that it is almost certain that corruption whistleblower Alexei Navalny will not escape a conviction in his current trial, but is ‘nevertheless skillfully raising the price of the Kremlin’s campaign against him’.  Gay rights organisation Vykhod (Coming Out) has been fined $15,600 for failing to register as a ‘foreign agent’.  Opposition leader Sergei Udaltsov has been formally charged with involvement in riots at the Bolotnaya Square protests last year.  His ally, activist Leonid Razvozzhayev, has also received his final charges of preparation of and participation in mass unrest and illegal border crossing.  The cost of shutting down Siberia’s controversial polluter, the Baikal pulp and paper mill, will be $430 million.  Sergei Shimkevich, the former head of a subsidiary of Yukos, jailed since 2010, has been released on parole.

The U.S. State Department named Russia among the world’s worst countries for forced labour, saying that it ‘does not fully comply with the minimum standards for the elimination of trafficking’.  President Barack Obama’s call for Russia to reduce its nuclear stockpiles by a further third ‘was given a frosty reception by Moscow’.  Obama and Vladimir Putin had a reportedly frosty exchange about basketball at the end of the G8 summit earlier this week.  The United States topped a recent Levada Center poll where respondents were asked to list the countries they considered to be hostile to Russia; the U.S. has swapped positions with Georgia since the same poll last year.  A member of the United Russia party wants Russia to improve its ‘digital sovereignty’ and legislate foreign websites, in a bid to combat spying by U.S. surveillance systems.