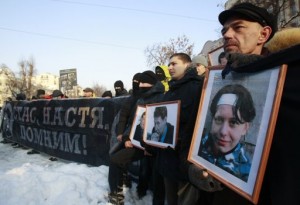 Hundreds gathered in Moscow on Saturday to commemorate the fourth anniversary of the murder of human rights lawyer Stanislav Markelov and journalist Anastasia Baburova.  Gay activists at a sanctioned march in Voronzeh yesterday were beaten ‘by an angry crowd’.  More than 82,000 Muscovites bathed in ice-cold water to mark the Orthodox holiday of Epiphany.  The Opposition’s Coordinating Council, which is supposedly concerned about low productivity since its inception, has scheduled its next protest for the Spring, focusing on the release of ‘political prisoners’.  Vladimir Frolov urges leaders to find ‘ways to accommodate some of the protesters’ demands’.  Russia has started its largest naval exercises in years as analysts said that ‘the drill was probably meant to remind the West of Russia’s links to Syria’.  Russia admitted that it has denied a visa to former U.S. commander at Guantanamo Bay, in connection with its anti-Magnitsky Act legislation, as the International Affairs Committee explains that the current blacklist of U.S. officials stands at 60 people.  ‘Putin may have rejected American ideas of democracy but he seems to have wholeheartedly internalised Bush’s approach to the culture war.’

The Moscow Exchange has announced its intention to float its own platform through the sale of stock.  First Deputy Prime Minister Igor Shuvalov says that the fact of BP raising its stake in Rosneft shows Russia’s willingness to surrender its state control over oil production.  Government ministers have been offered free crash courses in WTO rules.  A new report says that Russia could save more than $30 billion a year out of its $1.5 trillion infrastructure budget through ‘simple efficiencies’.  Prime Minister Dmitry Medvedev is pushing for cheaper high-speed Internet in households.

The acid attack on Bolshoi director Sergei Filin has ‘shone the spotlight on intrigue’ and long-term rivalries at the theatre.  The four miners killed at an explosion at a mine in the Kemerovo region are thought to have died of carbon monoxide poisoning.