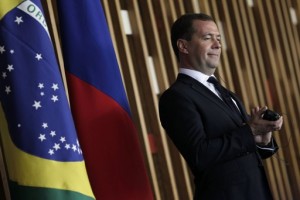 New details regarding the death of Max Shatto allegedly contradict statements initially made by the child rights ombudsman, Pavel Astakhov; the Texas sheriff says he has ‘no idea’ where Astakhov’s information came from.  The mother of the dead boy has asked that her other son, also adopted by the Shatto family, be returned to her.  Astakhov says that his office has been combing foreign media reports for evidence of crimes against Russian adoptees, ‘a possible indication that Astakhov not only opposes new foreign adoptions but is seeking a potentially wide-ranging review of past adoptions as well.’  This report looks at the numbers and concludes that U.S. adoptions of Russian children are ‘perfectly safe’.  St. Petersburg has banned unauthorised public gatherings of more than 200 people in the city’s central squares.  The IMF is optimistic about Russia’s chances for economic growth in the coming years – more so than Russia’s own top officials.

Russia and the Arab League want to broker talks between the Syrian government and opposition to end conflict in the country.  Former defense minister Anatoly Serdyukov’s refusal to answer investigators’ question over the Oboronservis fraud case is ‘within the legal framework’, according the the chief military prosecutor.  Amnesty International evaluates the status of free speech in Russia in the wake of the trial of Pussy Riot.  The Central Elections Committee wants regional authorities to be allowed to decide individually on whether or not to use vote-counting machines.  The military says it is devising technology to shoot down meteorites before they hit earth. Ilyushin Finance Co has signed a $2.56 billion deal to buy 32 jetliners from Canada’s Bombardier.  Will Russian Post be subjected to a $20.74 billion privatisation plan?

Speaking from Brazil, Prime Minister Dmitry Medvedev said that bilateral trade with Russia could reach $10 billion in coming years (it stood at $6.5 billion in 2011).  He plans to visit Cuba later this week, where he is expected to sign a space research agreement.  Reuters reports on cost overruns at Sochi’s $50 billion Olympics.  According to Dmitry Peskov, Russia will do all that it can to prevent the International Olympic Committee from dropping wrestling.