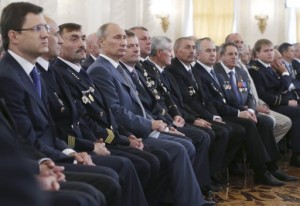 A leader of pro-Kremlin youth group Nashi has asked the Investigative Committee to conduct an inquiry into possible tax evasion by opposition State Duma Deputy Gennady Gudkov.  The Economic Development Ministry is proposing new measures that would require banks to disclose information about private accounts to tax authorities, currently being met with caution by Russian banks.  President Vladimir Putin has made a tacit intervention into the Norilsk Nickel shareholder conflict, saying that he hoped it would be resolved soon.

Police are searching for the members of Voina/Pussy Riot who remain at large, as opposition leaders fear the case could divide the opposition movement by putting Orthodox activists and socially conservative communists at odds.  Some Conservative Russian voices have expressed concern that the ruling is bad for Russia’s international image; former Finance Minister Alexei Kudrin says the guilty verdict and imprisonment of Maria Alyokhina, Nadezhda Tolokonnikova, and Yekaterina Samutsevich has done ‘huge damage’ to Russia’s ‘attractiveness for investment’.  Hackers have attacked the website of the Moscow court that delivered the verdict, posting a music video by a gay Bulgarian singer ‘near the Russian coat of arms’.

Weak crop prospects have led agricultural analysts to cut their forecasts for this year’s grain harvest.  TNK-BP will not disclose the buyer of two of its West Siberian oil and gas fields, which it sold for $450 million.  Yandex’s share of Internet searches gained this week, as searches using Google fell by 0.2% this month.

PHOTO: Russia’s President Vladimir Putin (4th L) attends a meeting with representatives of coal, ore mining and smelting companies, with scientists and veterans of the industry, prior to Miners’ Day, at the Kremlin in Moscow August 20, 2012. REUTERS/Ria Novosti/Michael Klimentyev/Pool