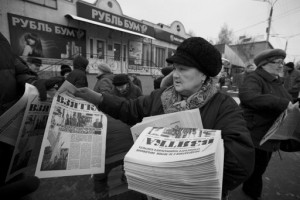 Moscow refused to grant permission for an opposition rally against ‘political repression’ on the grounds that there is no such thing in Russia.  The Interior Ministry has searched the home of Rostelecom president Alexander Provotorov as part of the ongoing criminal investigation against Marshall Capital over an alleged fraudulent loan.  Yekaterina Samutsevich, the only member of Pussy Riot to have been freed from jail thus far, may request that the group’s former lawyers (Violeta Volkova, Mark Feigin and Nikolai Polozov) be stripped of their licenses. Samutsevich’s new lawyer is alleging that the trio failed to return his client’s property when it was requested.  The Guardian meanwhile reports ‘bad blood’ between the women and their legal team since the end of the last trial, with accusations that the lawyers cared more about personal fame than the girls’ release, and accused Feigin (or Feygin) of forging documents to register Pussy Riot as a brand.  The lawyers, in their turn, claim that Samutsevich is a Kremlin collaborator.  Over a third of Russians cannot name the head of the Orthodox Church, says a new poll.

Eduard Mochalov, the farmer whose self-immolation protest failed to draw attention to a theft on his farm, has started publishing an anti-corruption newspaper called Bribe.  Natalia Pereverzeva, a former Miss Moscow, has made headlines for her impassioned anti-corruption speech at the Miss Earth pageant, calling Russia a ‘poor, long, suffering country, mercilessly torn to pieces by greedy, dishonest, unbelieving people’.  A court has ruled that TNK-BP’s fraud claim against Igor Lazurenko, its former head of logistics, must be dealt with by Russian – not British – courts.

Energy Ministry Alexander Novak has indicated that an exception to Gazprom’s monopoly on gas exports could be made for seaborne exports of LNG, which could mean a break for Novatek.  Norway’s Statoil has signed a ten-year deal with Germany’s Wintershall based on spot terms that rival Gazprom.  Gazprom’s massive investment plans for Nord Stream and Yamal do not add any value, says Anders Aslund, speculating that the company could hit bankruptcy within a few years.  Retail sales growth in Russia slowed last month, ‘disappoint[ing] economists’.

PHOTO: In this Nov. 14, 2012, photo, a woman hands out copies of Eduard Mochalov’s newspaper Bribe in Cheboksary, the capital city of Chuvashia, Russia. (Alexander Zemlianichenko/AP News)